Yesterday my historian pal, Harry, called to tell me his cousin had discovered a previously unknown baby buried in their family plot. Little Betty Richardson apparently lived about three years (1931-1934), had no gravestone and was not known to the family. She was born, died and disappeared. Harry and I discussed how this makes us want to visit her little grave and acknowledge her existence. Somehow we want to mark the fact that she ever walked the earth. It makes death seem a little less harsh if we imagine our memory outliving us, but how long can the memory of a three-year old live on? Once her parents are gone, who is there to perpetuate her memory? So today I await the outcome of a search for her parents in the Worcester City Clerk's office. But I don't even really need to know who her parents were. I just want to lay a Christmas rose upon her grave and mark the fact that she spent time on this earth, poor little soul.
My own family has a similar lost soul. My grandmother and mother, both genealogists, passed down to me that Israel Merritt Barnes (Senior) and his wife Olive Litchfield suffered a wait of 16 years after their daughters’ deaths before they welcomed another child –– Israel Jr. This was the reason that Israel Jr. was grew up to be so spoiled and squandered any money the family had managed to accumulate––he was just overly loved.

Israel and Olive had married in 1840. They first had Hannah E. Barnes on 7 June 1841. Then on on 18 October 1843 they welcomed another girl, Mandana Clapp Barnes. Both little girls died within eight days of one another in July of 1844, when they were 3 (of dysentery) and less than 1 (of bowel complaint). No further known children were born to this couple until 1861, when my great grandfather, Israel Merritt Barnes II (Junior), was born. This was twenty years after the birth of his parents' first child, and seventeen since they had lost their only children. They must have been elated at his birth! Israel Junior grew up in privilege, went on to speculate with the family fortune, and earned the moniker of "spoiled." At least there was a reason for his being pampered. One can understand his parents' grief and longing for more children, and commiserate a bit with their propensity to spoil a long-awaited child.

Israel Junior, the spoiled one, was the father-in-law of our first known family genealogist––my grandmother, Vernetta. She passed her hobby and passion down to my mother, who, in turn passed it down to me. Many years passed and it came time for me to write a kinship determination project for my certification portfolio. I re-examined every family unit, in fact, every individual in my family tree, and while doing so, came across something I used to routinely ignore.

Online family trees, which rarely cite sources, can contain many errors. They should be used, if at all, only as a springboard for potential research. But occasionally they can open up a new avenue and provide insight into an undiscovered gem. Because of an online family tree I discovered another child of Israel and Olive. Ancestry World Tree (AWT) shows the birth of Webster, son of Israel M. and Olive (Litchfield) Barnes in Scituate on 12 January 1855, and a death in January 1855.

What????? They had another child? What made her say that? How many years after the deaths of the girls was this? Eleven. How old was Olive? Thirty-five. Why had we not heard of this???? Unknown. And this is six years before Israel Junior was born!

I was quite sure it was some strange kind of error. However, I checked the source, and it was from the daughter of a woman who had grown up on the same street as my mother, the street I lived on until I was two. How on earth did she know this when my mother and grandmother hadn't? So I contacted her. She told me she had found the information in her mother's notes and that her mother was now suffering from senility. [Robin Hayes, redwhittrobin@aol.com, family tree submission, Ancestry World Tree (http://www.ancestry.com : August 12 2007), citing GEDCOM file : 2800260.ged, 10 May 2004; gives a birthdate of 12 January 1855 in Scituate, and death there January 1855. When contacted, the submitter, revealed that the information was from notes written by her mother, Polly (Sylvester) Whittaker, a Scituate genealogist suffering now from senility. She was a friend of the Barnes family, though born much later than the birth of Webster, probably about 1920 or so. There could be reasons for a friend of the family to note the birth, as valid as any reasons for the Barnes family not to note it.]

I needed corroboration, so off to genealogybank.com I went. A newspaper announcement indirectly confirmed Webster's birth through a death notice. Sadly, he too, like his sisters before him, had died young and left his parents to grieve once more.


There is no trace of either the birth or death of this baby in Boston City, Town of Scituate or Massachusetts state vital records. I searched for all Barnes babies born in 1855 across the state; all unnamed Barnes boys in 1855, all children named Webster. He has never been mentioned in the family genealogies. There is no gravestone for him at Mt. Hope Cemetery where his parents are buried. However, at the time of his death there was a Barnes/Vinal family tomb in which he could have been interred. To date, no records have been discovered for that tomb which is located directly across the street from the homestead. The Scituate Town Archives has a recent survey of cemeteries that mentions this tomb, but does not list who is buried there. When my 62-year old brother played there as a child the bodies had already been carried off, whether by animals or grave-robbers, we'll never know.

The newspaper announcement led in turn to a search of the records of the Unitarian Church in Scituate, which say: “June 1st, Infant child of Israel M. Barnes, 8 days.” [“Records of the First Church of Christ in Scituate, Mass.,” p. 97, Deaths, 1855; Scituate Town Archives.]

So now we have a conflict in dates. Two June 1855 sources, and a much later source. I go with the contemporaneous source (almost) every time, so I'm placing my money on little Webster dying on 1 June at eight days, and thus having a birth date of 24 May 1855. It is easy enough to mis-copy Jan. for Jun. The only place where he is named is in the newspaper article and the Ancestry World Tree entry, not in the family or church records.

These sources cannot be refuted, even though the birth and death never appear in official town or state records. There was no other couple named Israel M. and Olive L. Barnes in Massachusetts, especially in Scituate, at that time. There would be no other reason for this notice to be printed, no incentive to lie about such a sad event. Yet there are a multitude of reasons not to have the birth and death registered. If the child had been frail, they may have waited to report his birth. Since he passed away at only eight days, then the birth and death could in a way negate each other and the grief-stricken family may not have had the energy or inclination to bother with a simultaneous registration of birth and death. On the other hand, justification can be made for the minister and neighbors taking note of the events, as they were more subjective.

Scituate was a small town, a tight community where everyone knew everyone else's business. Thankfully, one of those neighbors took note of the birth of little Webster. If I could only locate his grave, I'd visit him with a Christmas rose, but in the meantime, I'll focus my energies on Betty Richardson. 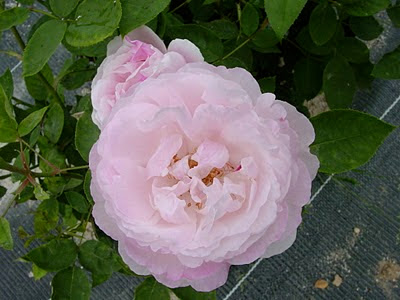