In April of 1979 on a twenty hour train journey from Rome to London I met a chatty but cordial gentleman from Rainham, Kent. Amongst many, many other things, he told me that he was a coin collector. He had a metal detector and spent his time scanning dried up riverbeds and other places for his favorite treasure––Roman coins. When he found out my surname was FitzGerald he was delighted to present me with a coin he had dredged up from the banks of the Thames Estuary one particularly dry year. Since it wasn't Roman he wasn't interested in it, so he gave it to me.

I’ve held onto this coin for thirty-six years: through all the time I lived in Rome, moving from pensione to pensione to apartment, then living in several apartments in the Boston area, my parents' house, grad student housing in England for a year, and two family homes in the 'burbs since 1989. That's a lot of moving, but I kept it stashed away with a few other treasures and keepsakes. I had always assumed it was a novelty token rather than a real coin.

Recently it has begun to gnaw at me. I Googled it a few times but never found anything like it. Finally yesterday I came across a fantastic website called Irish Coinage. I sent an email to the webmaster/author, John Stafford-Langan and he replied right away. I am so impressed by the extent of his knowledge and his willingness to share it with me. Here's what I learned.

The front (obverse) design is a set of arms  - he suspects of a goldsmith's guild - but has not been able to verify that. The name Garrald Fitzgerald surrounds the arms. The words that ring the coin are called the legend.

The reverse has a legend that reads "Goldsmith of Galway." Aha! I hadn't deciphered the "smith" part. John says, "It has a large 'I' with a small D above it - "double struck" so it looks like an 'L' (D was the old abbreviation for a penny (from the old French denier and originally the latin 'denarius'). Stars are often used on these tokens to fill the design around the denomination." So being double struck makes it hard to read both the word smith and the letter D.

In summary, it is a penny token issued in the 1660s (!!) by Garrald Fitzgerald, a Galway goldsmith. There was a severe shortage of small change in the mid to late 17th century and many English and Irish merchants issued token coins to alleviate the problem. In 1673 they were replaced by official coin. There are over 800 different types from Ireland and more than 16,000 from England. It is probably made of brass, but I should get it checked, not by a regular jeweler, though, because they are apt to file a bit of it off to test it and that would reduce the value. It is scarce, as most of the Irish ones are, but not particularly valuable unless it turns out to be gold.

He says: "I'm assuming that the token is brass based on the colour and because these tokens were generally made of brass or copper. However a very small number of examples were made as presentation pieces in silver and fewer again in gold.  The silver and gold specimens are normally much better struck than the normal circulating brass and copper example so the doubling of the letters in the legend and the striking crack suggest that this is most likely a brass example. There are no known Irish examples surviving in gold, only a few from London (from where a great many tokens were issued) so a gold example is unlikely, but would be of significant interest."

Normally the merchants who issued these tokens were prominent citizens - the city records often show them serving on the town council, or providing services to the town. I've traced my own FitzGerald line in Kerry only back to about 1790 or so. There is no way I could ever definitely tie them in with this fellow. But it's not out of the question to think that he could be related in some way. Pretty cool stuff lurking in my jewelry drawer all these years.

Where Were You the Day JFK Was Shot?


It's strange to think that when John FitzGerald Kennedy (no relation) died I was only eight years old. I didn't yet have a strong grasp on what that meant. I had experienced the death of my beloved Grandmother a year earlier and had taken that very hard, so I knew what a death of a loved one entailed.  I remember sobbing inconsolably in bed, and my brother yelling at me, "Stop bawling, Junior! Ma! Make her shut up!" This, of course, made me sob all the louder in my loneliness. I wondered why everyone else wasn't taking it all that hard, but of course their grief was tempered by the fact that she had been very ill in a nursing home and they had known it was coming. And they weren't eight.

On November 22, 1963, I was in third grade. Our classroom rarely was interrupted, but that day there was a knock on the door. When the teacher opened we saw two young teachers crying. They rushed into the room and whispered the horrible news.


When they left she told us the sad news: President Kennedy had been shot and was seriously wounded. Shortly afterwards the principal came over the intercom saying that we should pray for the president and would be sent home early. In the face of this earth-shattering development (early release) it was hard not to get happy, but we knew it was the wrong response even at that age. The bus ride home was strangely somber. It's strange, but my memories are that it was before lunch. Yet looking at the time of the shooting, I see it must have been after: he was shot about 12:30pm Dallas time (2:30 Massachusetts time), so the release wasn't actually all that early. By the time we got off the bus that Friday, the president had been declared dead.

I knew the president was important because we had talked about him in class. In the same lessons where they taught us about George Washington, they'd wrap up by talking about President Kennedy. My favorite day of school ever was was February 20, 1962, when they wheeled in a giant TV on a cart so we could watch John Glenn be the first American to orbit the earth.  I knew that came at President Kennedy's direction.

What I remember learning from this was that adults could care about people they had never met: people on TV, politicians, strangers. I remember the universal shock, the constant news commentary, Walter Cronkite's quivering lip even. People were glued to their TVs, an unusual situation, at least at my house.

When Ruby shot Oswald my mother witnessed it on live TV. I came in from playing outside and she was more agitated than I ever remember her being. I still didn't understand the importance, but I felt it. To this day I retain few details. I wonder how much my mind may may have filled in with things I've learned since it happened, too. Still, these are my memories of the day the President was assassinated.
Posted by Polly F. Kimmitt at 8:27 PM 3 comments: 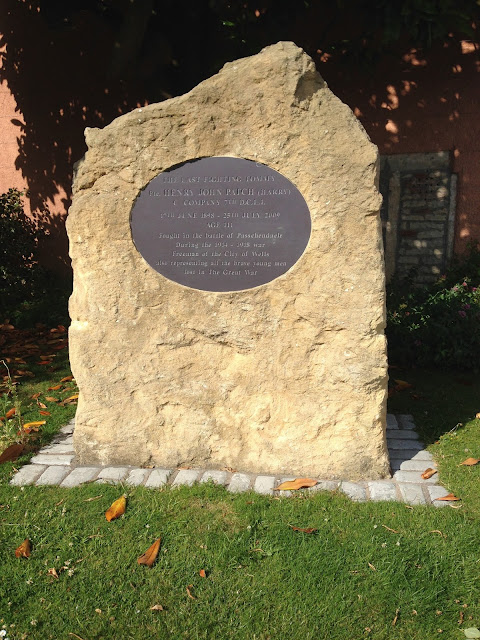 Private Harry Patch was the last soldier who fought in the trenches of World War I to die. He suffered unimaginable horrors and carried many of the details into his late years, as told in an interview with The (London)Telegraph here.

He entered the war in June of 1917 and served as an assistant gunner in a Lewis Gun section, according to Lee Rimmer in Abroad in the Yard, and suffered injuries to the groin from shrapnel when a shell exploded killing three of his fellow soldiers.

This memorial is in beautiful Wells, England, in Somerset. In the photo below it is on the left side of the street on the left, just above the red car. You can read more about his life on his Wikipedia page, here.

Posted by Polly F. Kimmitt at 3:36 PM No comments: