I never met my paternal grandmother Annie, since she died before I was born, My father was not one to talk much about his family and I was such an oblivious child that it took me a long time to realize that both of his parents had spoken in a thick Irish brogue.

Annie was born 18 December 1869, the daughter of Philip O'Sullivan and his second wife, Julia Clifford, in Callinafercy West, near Milltown, County Kerry, Ireland. (1) She didn't know my grandfather before coming to Boston, but he grew up in the next town over, Castlemaine.

On census records Annie's date of immigration varies--anywhere from 1884-1895. Since immigration records were not very detailed I can't make any progress with pinning that down as her name is too common.

I'm sure she met my grandfather, Patrick John FitzGerald, through mutual friends, and they married on Sunday, 6 September 1896 at St. James Church, in Boston. She was a domestic. (2) My sister remembers family stories of Annie having worked as a cook in the Back Bay section of Boston.

There were many men named Patrick FitzGerald in Boston, so he is ridiculously hard to trace, though he seemed to use that middle initial J. often enough for me to count on it. He was alternately a laborer, longshoreman, and plasterer, and they moved frequently to various tenement apartments in Boston, from East Boston to the South End, barely managing to keep one month ahead of the rent man. By 1918 they were in Arlington. While I might be able to track Annie via her husband, I have no detail for Annie herself other than what my sister can remember, and Annie died when my sister was 9. She tells me that a cousin told her that at one point some of my father's sibling were living with cousins. That part is very vague.

I do know that she had six children, five of whom lived. Annie's oldest daughter, Mary suffered from some sort of mental illness, perhaps schizophrenia, and was practically shut away for most of her life. I never met her. Annie's oldest son, Jack, was a very successful lawyer in Boston. Theresa married twice and lived a rough life. And Frank fought valiantly in WW II but suffered from PTSD. He never married. My father (born 1910) was the youngest living child, but there was one more born after him, William Frederick, born 16 November 1912 in Boston. He died a few months later, on 6 January 1913. I have written another blog post about him here.


Annie and Patrick had a tough life, but the two managed to earn enough money to allow them to purchase a little dairy farm in Lexington where they moved before my father hit high school, probably about 1920. They went bankrupt during the depression then eked out a living doing odd jobs. My sister says Annie liked to tip the bottle back of a Friday evening, and I'm not surprised! My sister also remembers Annie reading the paper out loud to my grandfather.


The family story says that Annie fell and broke her hip, then died. Upon her death my grandfather took to his bed, turned his face to the wall and refused to eat, and died soon thereafter. The death certificates indicate that Annie actually died of a coronary occlusion due to arteriosclerosis on 2 August 1949. (3) And Patrick died 19 days later, on 21 August, of hypertensive heart disease and diabetes. (4) Having been married for more than 50 years it would not be surprising if he did actually die of broken heart syndrome, poor fellow.

Annie's obituary mentions a sister, Mrs. Patrick J. Crimmin, of Salem [unmarked newspaper clipping]. I believe this was her sister Margaret, born about 1881.

Annie is buried near Patrick and two of her children at the Mt. Pleasant Cemetery in Arlington. 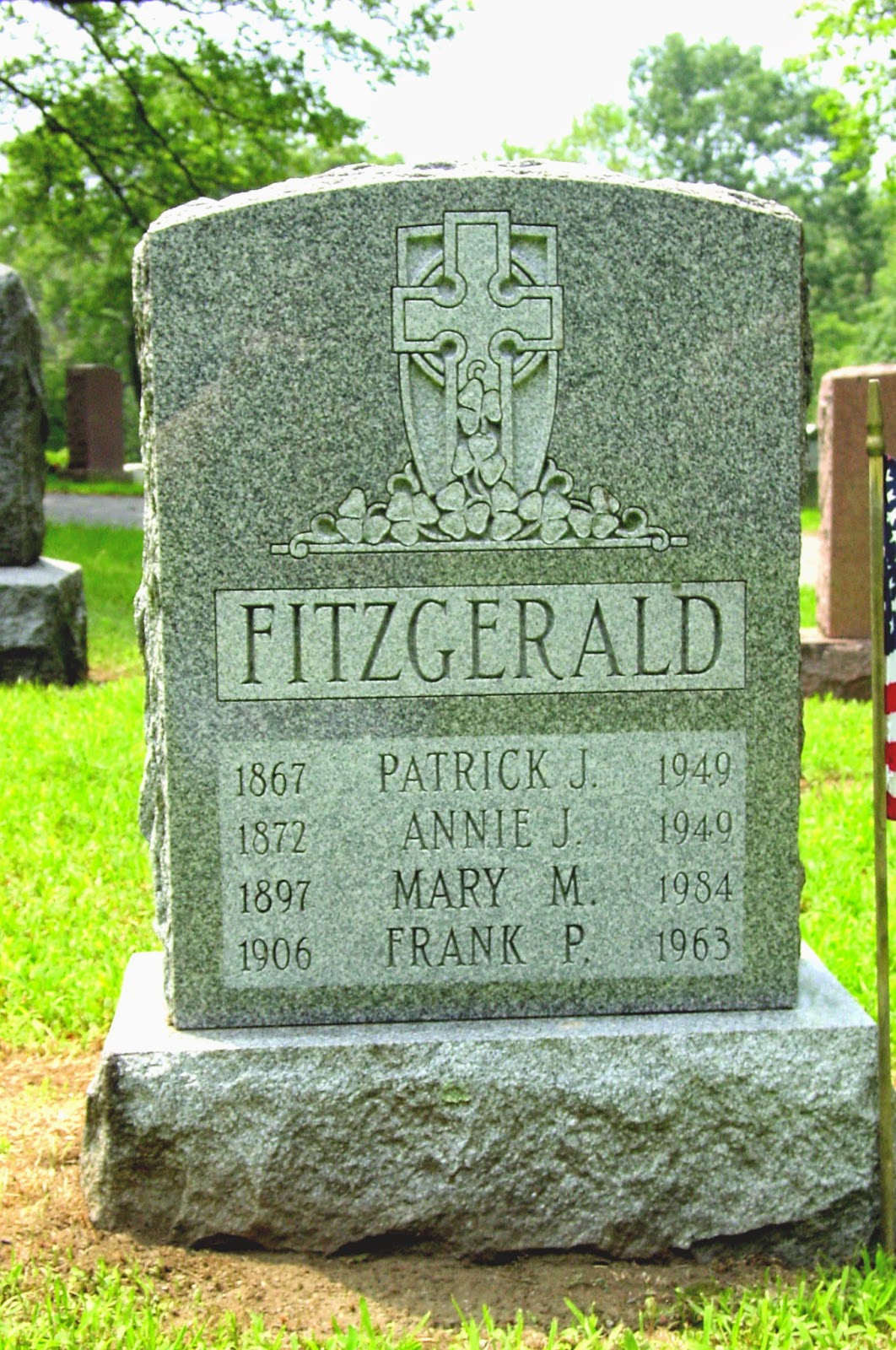 
I'm so far behind that I must whip out three of these blog posts asap! So forgive me if I merely skim over what I know about my mother's mother, Vernetta Gertrude (Jones) Barnes. I've written about her before, especially in "Growing Up in a Massachusetts Mill Town." I was very fond of her, but only ever knew her from a child's viewpoint, and sometimes wonder what she was really like.

Vernie, as she was called, was an avid reader, loved history, but best of all, was a genealogist! She infected my mother and two aunts with the same passion, and thus it passed to me. She always said she was born 13 June 1892 in Lawrence, Essex County, Massachusetts, but the funny thing is, she couldn't prove her own birth. It wasn't her fault. The Lawrence City Clerk has messed up her name, sex and date of birth, and with a surname like Jones it was too hard to find. The exciting story of how I found it will have to wait for another time.

I'm not 100% sure but I assume, given the times she lived in, that Grandma Barnes was hot to find a "notable" ancestor or one with some blue blood. Her own parents were descended from New Brunswick Loyalists, so the DAR was out. Research progressed at a much slower rate in those days, so she never knew it but she had Mayflower ancestry. I'm sure she would have loved that! She spent a lot of her time researching her husband's family since they were right there in Scituate and it was all so neatly done in the published vital records and town histories. Of course we delve deeper now, but she was pretty stringent about her proofs and paid attention to conflicting information. I've found very few errors in her work.

Considering she died when I was so young, I remember quite a bit about her. Grandma Barnes [pronounced Gramma Bahnes in local accent!] was always good to me. Every Sunday we'd go pick her up and bring her back to our house for Sunday mid-day dinner. She would play card games like Go Fish and talk to me about whatever little girls want to be talked about. And she was funny. Once I excused myself to use the bathroom and she said, "Go for me too, would ya?" I just thought that was the funniest thing ever. I slept over at her house a few times and was enthralled with her because she cut the crusts off my peanut butter sandwich and my mother never would! Funny the things that win a child over.

Every Memorial Day my mother would pick her up and we'd go to the cemetery where our ancestors are buried and decorate the graves with geraniums and great big white wicker baskets full of gladiolas. I loved that cemetery (Mt. Hope, in Scituate, Massachusetts) because there was a spigot with running water, seemingly in the middle of nowhere. How convenient! And there were little wild flowers I could pick--violets, and one we called "Pussy Foots" which I've just Googled and discovered are actually called Pussy Toes! They are very soft and resemble kittens' paws.


My grandmother lost her husband when she was only 48. Her youngest children, twins, had just graduated from high school and World War II was in full swing. Her two eldest daughters were married, and her only son was in the Navy. I'm sure she was lonely and overwhelmed with the big house to take care of, but she was very civic minded and involved in the League of Women Voters, her work at the library and for SS Peirce, and with her garden. And she was pretty sociable, hosting card games and dinners for friends as well.

Vernetta died of an embolism in August of 1962, when I was still six. Against their better judgment my parents let me attend her funeral and I cried lustily, much to the annoyance of all in attendance. I couldn't figure out why they didn't seem sad, but she had had a stroke and was in rough shape before she went. I remember my brother whacking me on the arm and saying, "Junior, shut up!" But I just couldn't stop bawling. We had lived with her for the first two years of my life and I'm sure I was very attached.

I sometimes wonder if I would love her as much today, I mean if I knew her as an adult. I'm pretty confident I would. It would blow her mind to see how much information is at our fingertips for genealogical research via the web. I know we'd have plenty to talk about, starting with genealogy, but hopefully on other subjects.