Week #11 of 52 Ancestors: James Cudworth, A most Prominent and Good Man 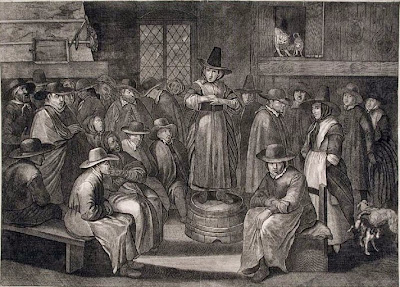 Much has already been written about one of my all-time favorite ancestors: James Cudworth. It was during my first forays into genealogy, reading Samuel Deane's History of Scituate, that I read of Cudworth and his defiant stance, and immediately fell in love with him (as a grandfather (8th-great), of course! [1]  And all because he stood up for the Quakers. But early authors seem to romanticize and exaggerate, so I prefer to verify by going straight to those who ferret out actual fact. Specifically, Robert Charles Anderson [2] and Jeremy Dupertuis Bangs [3], who have both written though treatments on him, based on primary information in original sources. You can also get a quick overview on Wikipedia.

He was a learned man, much sought after for high positions in the colonial government, even rising to Deputy Governor of Plymouth Colony, but he had a few run-ins with his superiors because of his enlightened principles and that kept him from reaching his full potential. Yet by continually defying them on their religious intolerance he eventually wore them down and the eventual loosening of that intolerance can be attributed at least in part, to him.

According to the above trusty sources, he was baptized on 2 August 1612, in Aller, Somersetshire, where his father Ralph was rector. His mother Mary Machell's line can be traced back to the 12th century which is pretty useful for when people ask "Who's your earliest known ancestor?" I have not done any research on her line, but it's nice to read about her and know that at least one of my ancestors was a signatory to the Magna Carta.[4]

He married Mary Parker in Northam, Devon, on 1 Feb 1633/34 and they arrived in Scituate by 1634.
James sort of hit the ground running, being admitted as Freeman in Plymouth on 1 January 1634/35. By the 18th of January he and Mary had joined the church at Scituate. They had five known children and I am descended from two of them. Mary, who married Robert Whitcomb, and Israel whose wife's name is not known. He went to Barnstable and served as a Deputy to the General Court from that town in 1640 and 1642.

In 1640 he was brought before the court for selling wine when he wasn't licensed to do so. Dinners at his house with wine and intelligent conversation must have been sort of fun.

They returned to Scituate by 1649. Mary was fined in 1658/59 for not going to church, indicating that she was a Quaker by then. So how did this family survive/pull it off? We all know how harsh the laws were in early Massachusetts. Didn't they hang Quakers? Or at least expel them? Yes, they sometimes did. But James Cudworth was a well-loved, prominent man in the community, so eloquent, and fervent about pointing out injustice. He dared to speak up.

In about 1660 he described his fall from power in a letter: "Last election Mr. Hatherly and myself were left off the bench, and myself discharged of my Captainship, because I had entertained some of the Quakers at my house, thereby that I might be the better acquainted with their principles... But the Quakers and myself cannot close in diverse things, and so I signified to the Court; but told them withal, that as I was no Quaker, so I would be no persecutor."

How wondrous is that? Doesn't really fit in with our stereotype of the Puritans, does it? What I love best about it is that he wasn't fighting for himself––he didn't even agree with the Quakers, but he saw the necessity of leaving them alone, and just wouldn't let it go. I love that. It still resonates loudly today.

The letter was intercepted and he was booted out of all major positions (disenfranchised) for many years. He was removed as Captain of the Scituate militia, stripped of his freeman designation, not given any power. The Town of Scituate made an attempt to bring him back, but the General Court would not allow it.

He kept sending well reasoned arguments and eventually after 15 years he was reinstated. It is hard to tell if it was just a softening of the attitudes or if they needed his military expertise, because they immediately put him in charge of an expedition against the Dutch. He then served in King Philip's War and survived, unlike most Scituate men. He finally died in 1681 while on a trip to England, leaving behind him a will, my ancestors, and a lasting legacy of forward-thinking concepts.