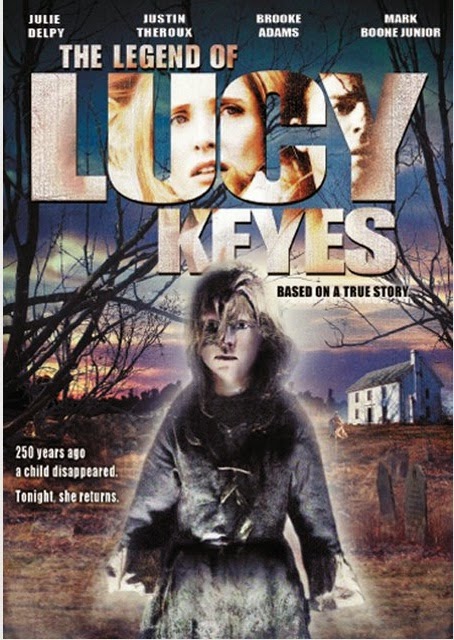 A 2005 movie called The Legend of Lucy Keyes tells the story of a couple who move from the city to a new home in the country that is haunted by previous inhabitants. It references the tale of the four year old Lucy Keyes, who wandered off into the wilderness from her Princeton, Massachusetts home in April of 1755, never to be found again.

I'll just tell you the legend, then refer you to a very nice analysis of the story by the author of the History of Princeton, Francis Everett Blake. Though he wrote his pamphlet in 1893 it is such a well reasoned analysis (though devoid of citations he does tell us what he consulted) that you will probably be as satisfied as I am that he is correct. You can read more about his life here.

Lucy's parents Robert Keyes and Martha Bowker moved from Shrewsbury to Princeton in about 1751 with their first five or so children. Princeton was hardly settled so they moved into a virtual wilderness. In order to find their way through the thick forests they would mark the trees so they could get back home again. Below is a view from the top of Mt. Wachusett, a small mountain on whose Eastern slopes the family lived.

One day Lucy's sisters were sent to the nearby pond to fetch sand for some household purpose. Little Lucy followed them through the woods. The sisters returned, but Lucy did not. Her poor mother Martha was devastated, as we might expect--I'd just go insane and be done with it. Martha repeatedly went out into the woods calling pitifully for Lucy long after the event occurred and when all hope had been exhausted by reasonable folks.

There were various explanations of the disappearance: Indian abduction being the most likely. That was somehow corroborated by a someone who met a group of Indians with a young European/white girl living with them who could only say " 'Chusett Hill" when asked where she was from. Robert never got a satisfactory answer about that during his lifetime though he spent a good deal of money trying.

Eventually the hubbub died down, though Martha was never quite right (goes without saying). She died in 1785, brokenhearted, and is buried in the Meetinghouse Cemetery in Princeton. The legend says that her ghost haunts the forests around Princeton, and her plaintive cry can still be heard late at night, searching and hoping--Luuuuuucy! Luuuuuuuuuucy!

There is no gravestone beside Martha for her husband Robert, nor was there one in 1893 when Blake wrote his pamphlet, though he was most likely buried there (and there is room next to her). Robert suffered great financial losses from his search for Lucy, and most likely died completely impoverished, with no money to pay for a stone. (1)

All was calm for many years until in 1859, during the Centennial celebrations in Princeton a letter came to light that purported to solve the mystery. According to witnesses at the deathbed of Tilley Littlejohn, he confessed to Lucy's murder shortly before he passed on! Tilley had been a neighbor of the Keyes family and in fact at one point there arose a boundary dispute, so there was some animosity there. Tilley said he was angry about the dispute, came across young Lucy wandering in the woods, and bashed her head against a log, stuffed her corpse into a hollow log and went home. Though his response may seem disproportionate to the disagreement, you can imagine that maybe he had some mental problems that exacerbated the animosity in his mind and caused him to grossly overreact. So far it's believable. 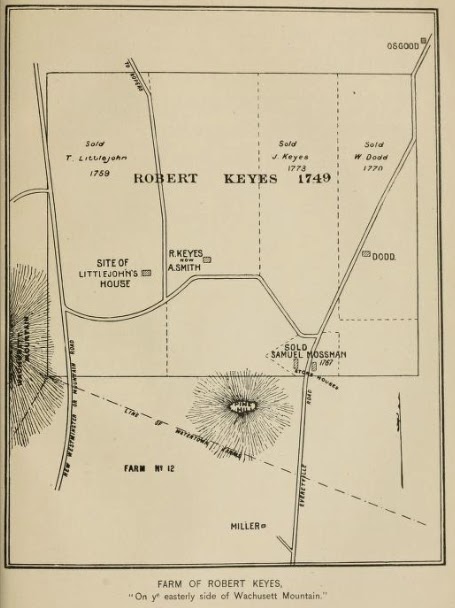 Tilley then joined the search party, steering them away from the log. He returned later and moved the remains to a hole in the ground, covered it with soil and leaves, set fire to it (not logical!--that would call attention to it) and went home again. Tilly supposedly furnished extensive detail in his deathbed confession. Eventually, they said, he moved away and everyone forgot all about it until the letter about his confession was unearthed.

Well, I suppose it was possible, but if you're like me by now you are frantic for some evidence! The facts need to be checked. Luckily we have Francis Everett Blake on the case! I'm not going to tell you what I think. I'll let you be the judge. Did Blake crack the case over 120 years ago? What really happened to Lucy Keyes? Read Blake's analysis and see if you agree. 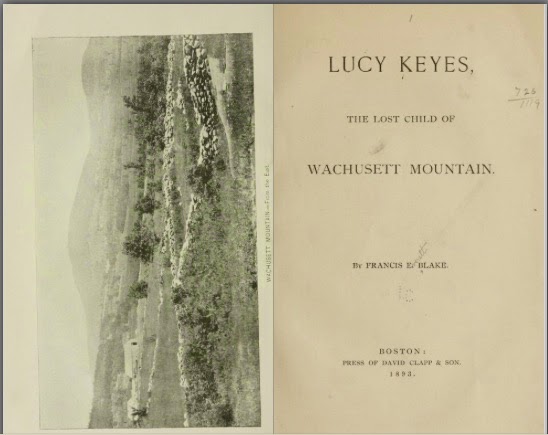 One of my favorite burial grounds is the Meetinghouse Cemetery in Princeton, Massachusetts. It is right off Mountain Road, but sunken down a steep embankment so when you enter you're buffered from the modern world. It's as if you are traveling back in time.

Like most early burial grounds, it was sited adjacent to the original meeting house (church), which used to stand directly across the street, according to the website of Princeton's First Congregational Church.

The cemetery is small, and a real pleasure to explore owing to its beautiful gravestone carvings. Because slate holds up so well over time, the earlier stones are clean and legible, belying their age.

One of Princeton's most influential early residents, and the man who donated the land for the church and burial ground was Moses Gill. According to the History of Princeton (1) Moses was born in Charlestown in 1734. He was a successful hardware merchant who twice married into wealthy families. By marrying so well he became the owner of large tracts of land in Central Massachusetts and kept a beautiful country home in Princeton. He had no children with either wife.

By 1774 Moses had turned to politics and occupied various positions in government, starting with the Provincial Assembly and eventually moving on up to Lieutenant Governor of Massachusetts, then Acting Governor after the death of Increase Sumner. But it was his time as Judge and Chief Justice in the Worcester County Court of Common Pleas that will prove most interesting for our purposes.


This burial ground contains the graves of three servants of Moses, all lined up together: Flova, Thomas and [illegible], pictured below. 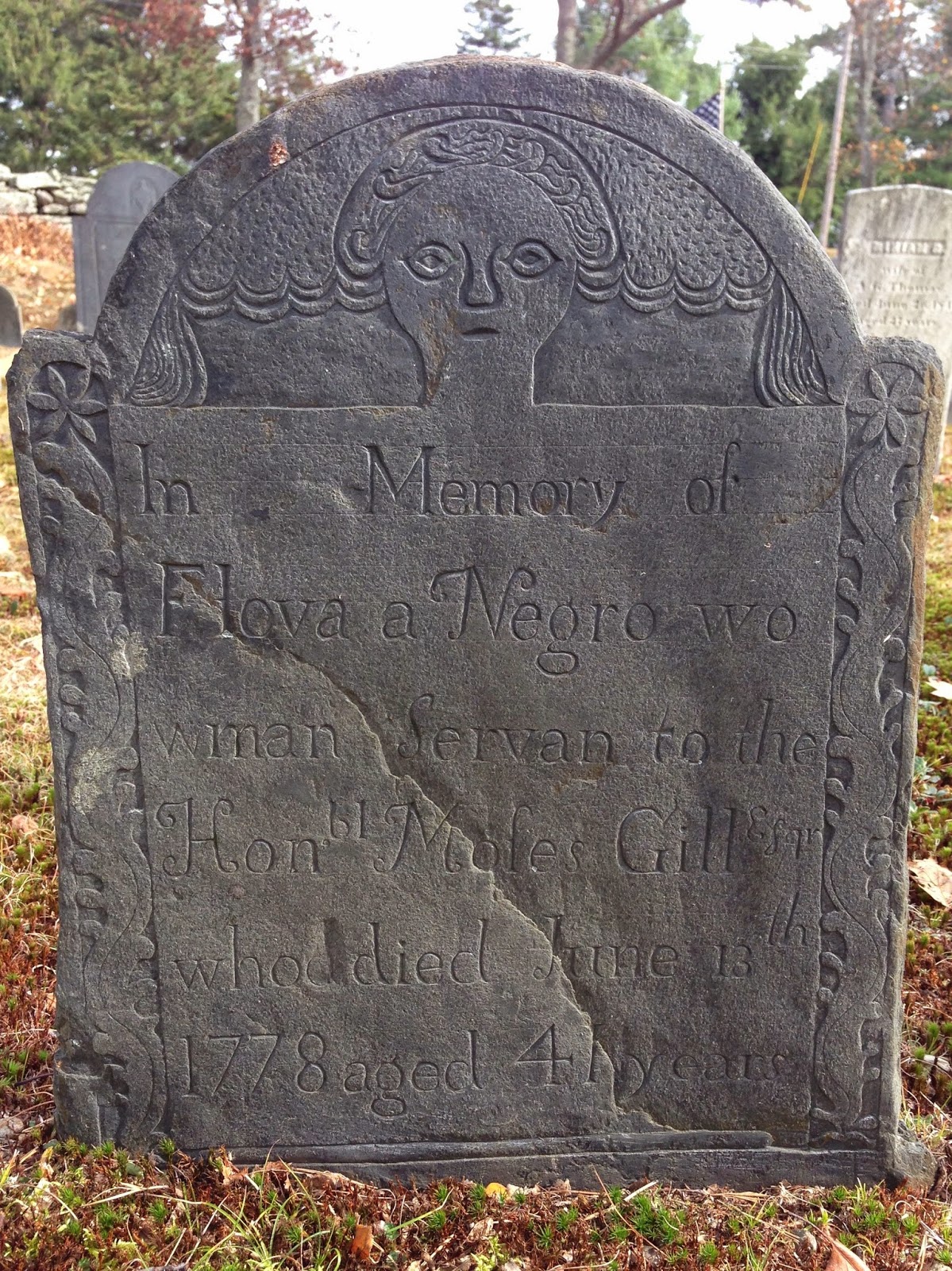 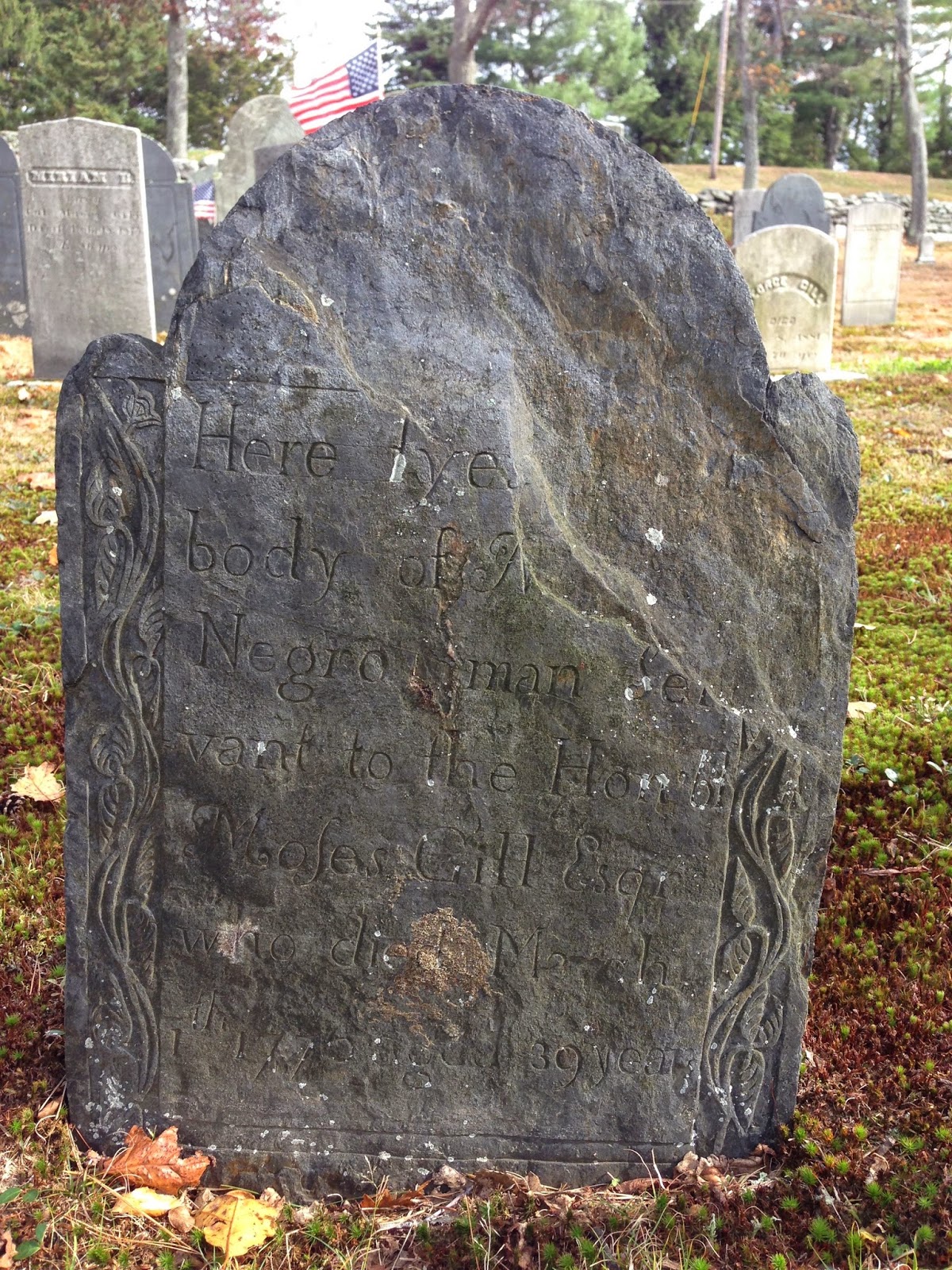 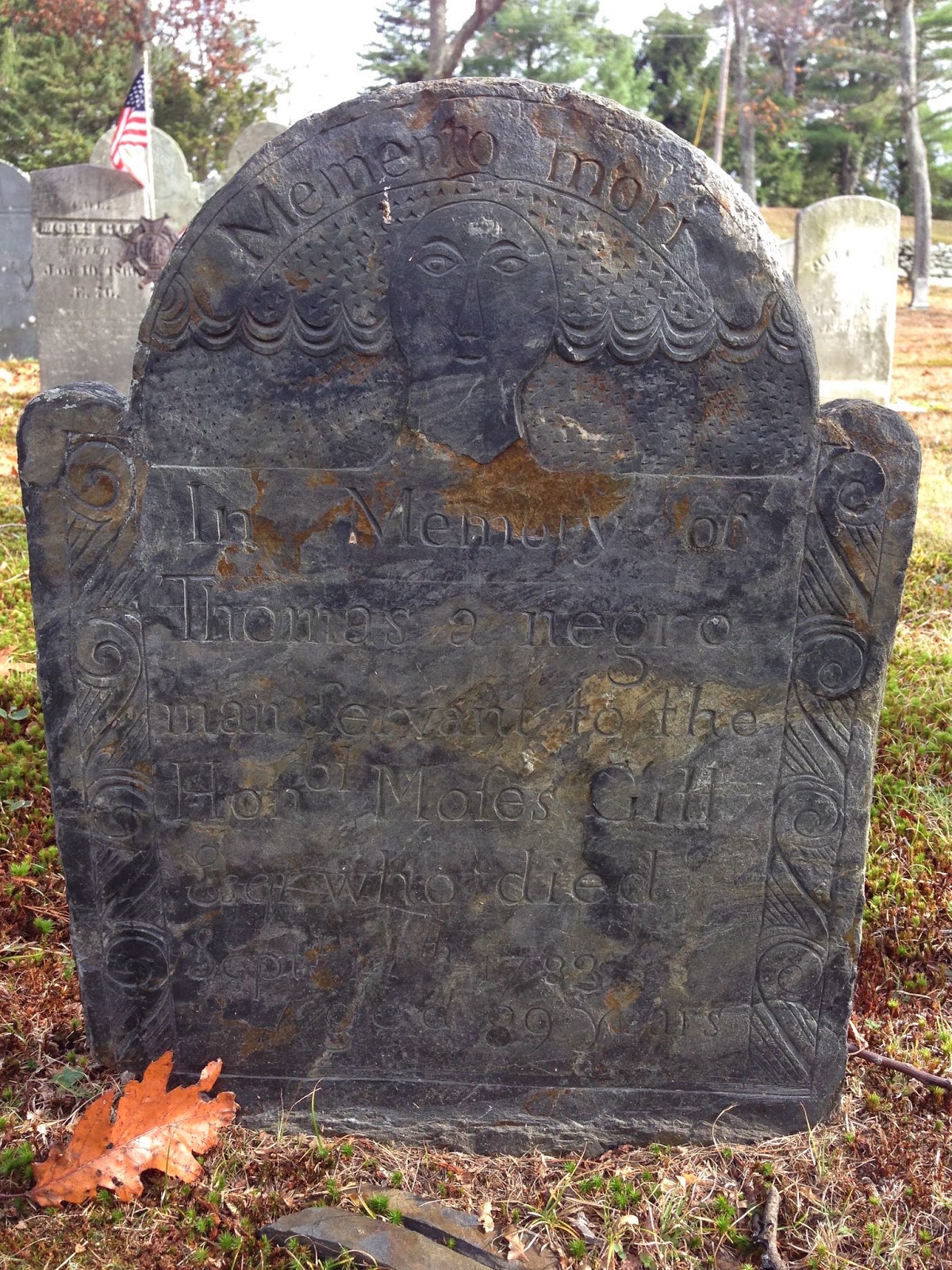 The History of Princeton mentions all three slaves in the sketch for Moses Gill (lists them as if they are children), and gives some additional information, citing only "town records of Princeton":

Now. We can see what information he gleaned from gravestones, but obviously a good search of Princetown records is in order, because Nero coming from Sutton with his mother Violet is really interesting. They came to Princeton at about the same time as Moses did from Charlestown. Note the spelling of Flora here as opposed to the gravestone's Flova. 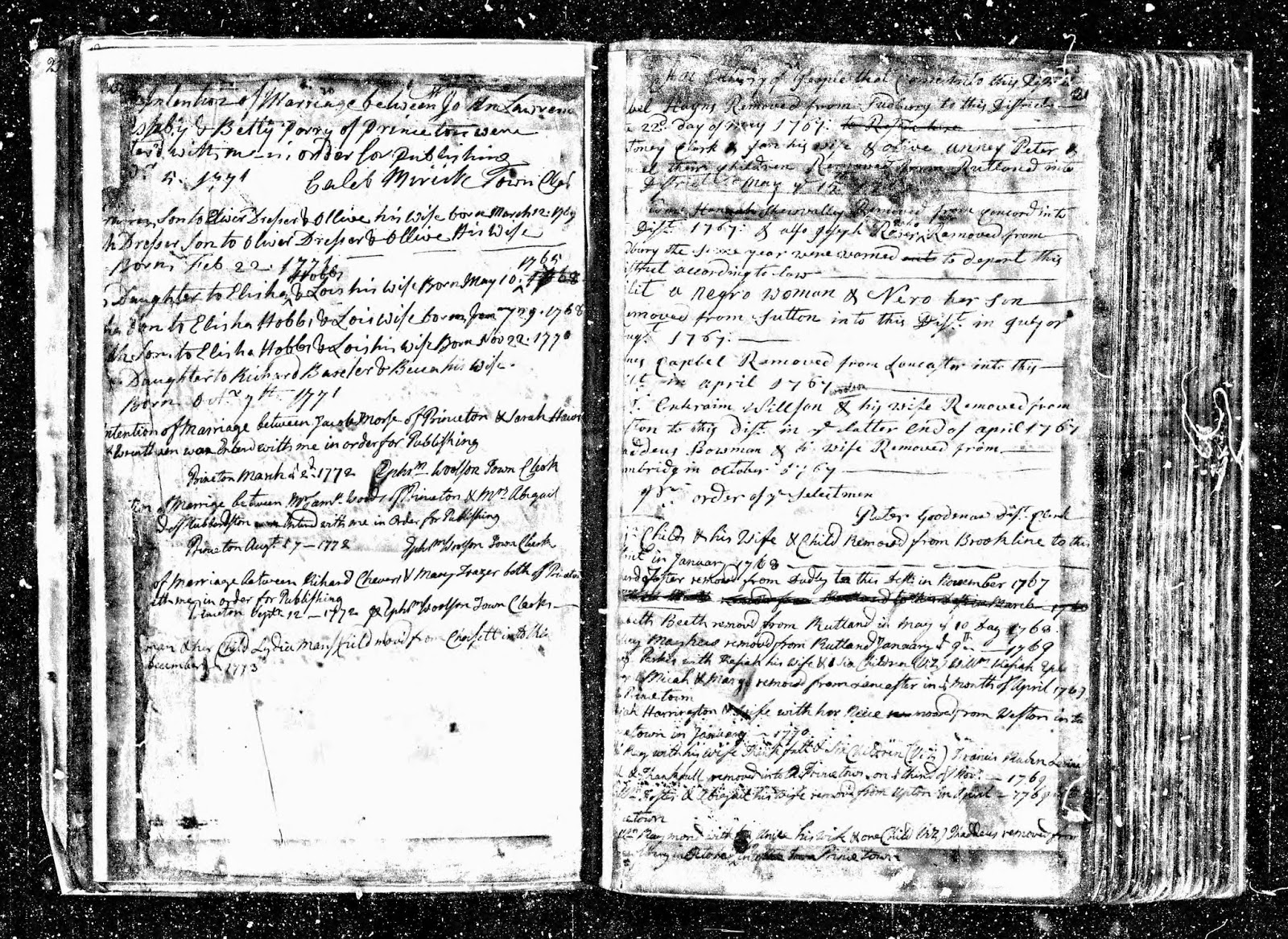 [-ilit a negro woman & Nero her son
Removed from Sutton into this Dist in July or
Augt 1767.

There are other volumes of town records which could be searched for more information. Without seeing the original register I can only hope that Francis Blake was accurate in recording the name [Vililit?] as Violet. But isn't it lovely that all of these people entering town were recorded, with their places of origin?

So Moses Gill had three slaves/"servants" that he thought highly enough of to erect gravestones in their memory. And not just inexpensive gravestones. Every letter carved cost something--every filigree, and especially portraits. The average person could not even afford a headstone, never mind one with words, but depicting a face was an honor indeed. While not an accurate rendition, these primitive images do have some detail. They are just one step in the development of gravestone iconography which started early on with winged skulls, progressed to death heads, and graduated to portrait stones.

Though slavery was outlawed in Massachusetts from the beginning (3), the practice did occur and people learned to avoid the slave word and call them servants. Moses Gill was Chief Justice during the famous Quock Walker trials. Quock's owner died, having promised him his freedom, and Quock was passed on to the deceased owner's wife. When she remarried her husband abused him. Quock sued for his freedom. This came on the heels of the American Revolution and there was much talk of "being created equal." There were several trials and the decisions went both ways, but in 1781 Quock Walker won. (4)

I could go off on a million tangents here because this subject is so ripe for exploration. Did these trials make Moses more sensitive to the plight of African American slaves or was he already so inclined? It may be assuming too much to say that he was probably a fair master, but I want to believe that is so. In any case, he gave his three slaves enough of an identity to still be remembered 230 years after their deaths, and that's worth noting. 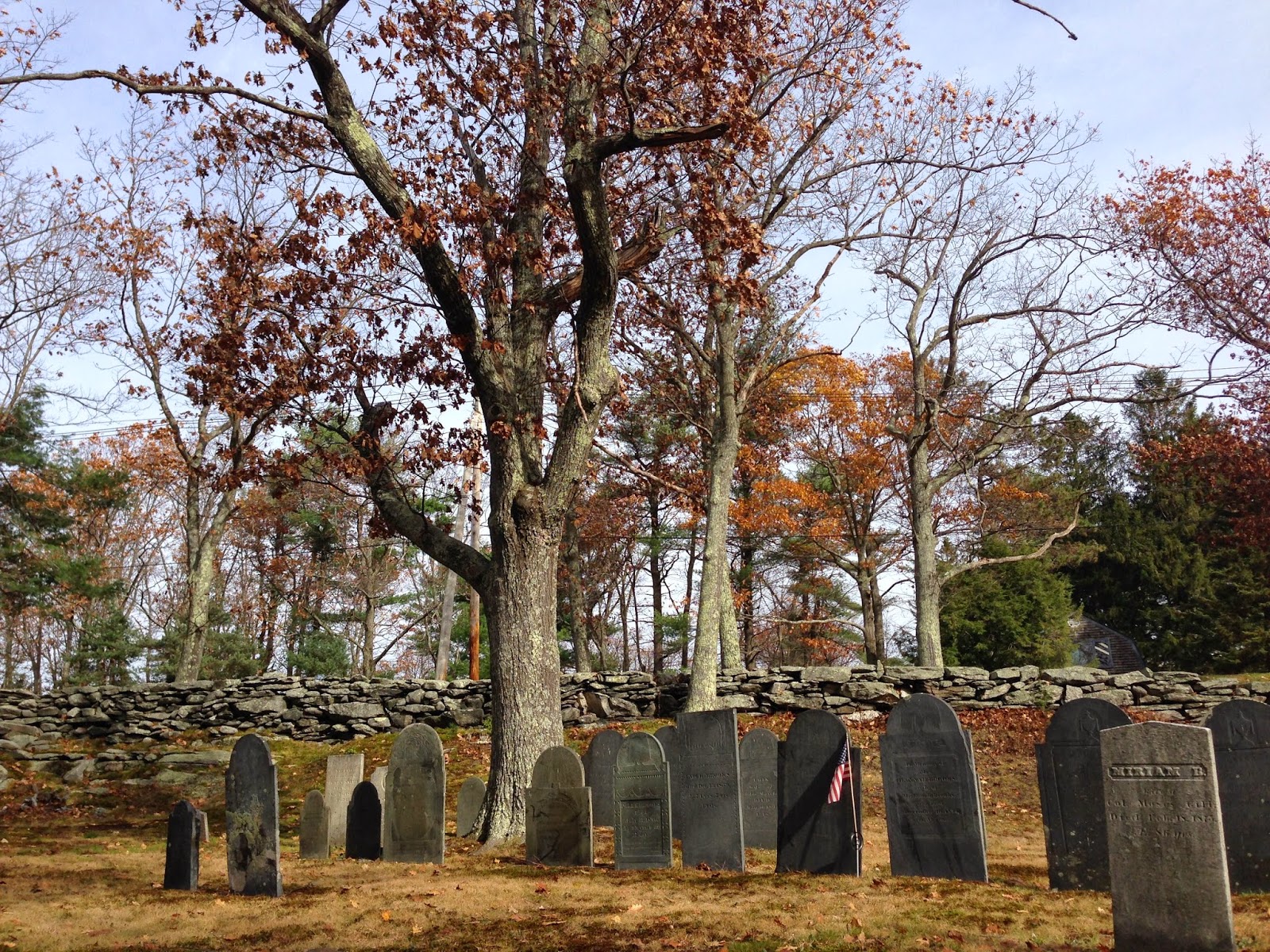 2. "Town Records and Marriages, with Births, Marriages, and Deaths," Princeton, Massachusetts, p. 21 [penned]; Ancestry.com (http://www.ancestry.com : accessed 7 November 2014), image 12. The image of the cover shows the title of the volume as "Records, Feb 9, 176[1?] - Mar 8, 1788, Births, Deaths and Marriages, Miscellaneous, Princeton, Mass.," and there is a note from Francis E. Blake dated 1883 mentioning it being rebound and saying that the records were put in more of a chronological order.

3. Nathaniel Ward, The Massachusetts Body of Liberties (Boston, 1641). n. 91. "There shall never be any bond slavery, villeinage, or captivity amongst us unless it be lawful captives taken in just wars, and such strangers as willingly sell themselves or are sold to us."

4. Emory Washburn, "The Extinction of Slavery in Massachusetts, A Paper Read Before the Massachusetts Historical Society, at Their Monthly Meeting, April, 1857," Collections of the Massachusetts Historical Society, 333; Google Books (http://books.google.com : accessed 7 November 2014). This is interesting because we hear the opinions written in 1857. See also George H. Moore,  Notes on the History of Slavery in Massachusetts (New York: Appleton, 1866); Google Books (http://books.google.com : accessed 7 November 2014).
Posted by Polly F. Kimmitt at 3:05 PM 2 comments: