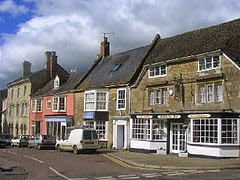 I'm working in Salt Lake City at the Family History Library for ten days. In recent years, the way we research has changed considerably, and it will continue to change. Today when I search the library catalog I'm just as likely to find the records I seek on the FamilySearch website as in the microfilm. It speeds up my research tremendously to have it online, but also makes me think I shouldn't do what I'm doing because I could do it later at home. However, I must strike while the iron is hot!


Though the Kimmitts take great pride in their Irish blood, they have married into several English lines, and the Cox family is one of them. I wrote about Robert Fitzgerald Meredith in my previous post. Robert was not the eldest son and therefore did not inherit property because of the law of primogeniture.

As a young vicar he got a posting in Dorsetshire and there met his wife, Mary Russell Cox, thus introducing the English Cox line into the family. Mary was baptized in Beaminster on 22 September 1826, the daughter of our subject, Samuel Cox, and his wife Virtue/Vertue Russell. (1)

By bouncing between the Dorset parish record extracts on FindMyPast.com, and images on Ancestry.com, and FamilySearch.org I'm able to add quite a few names to the old tree, with pretty solid evidence to back it all.

Samuel Cox was born on 9 September 1790 in Beaminster and baptized on 16 December of the same year, the son of Samuel Cox and Ann, image below. (2)

We know Samuel's mother Ann's surname was Symes from their Beaminster marriage record: "1790, Samuel Cox Jun.r and Ann Symes both of this Parish were married in this Church by Banns this 23rd Day of March by Hugh Pugh Curate." I wonder if the local kids mocked poor Hugh Pugh for his name? You may have noticed that Baby Samuel was born only five and a half months after his parents' marriage. They may have been brought up for punishment, or at least a good scolding.

It's a very nice record because it has witness signatures. The last one is young John Cox Russell, aged 6 years, making his mark. Isn't that cute? I've never seen a minor listed like that. I can just see him all dressed up and excited to be playing a part in the wedding. (3) I  do not yet know how, if at all, he is related to the groom, but find in the parish registers that he is the son of John and Mary Cox–which John Cox will have to be determined at a later date. (4) 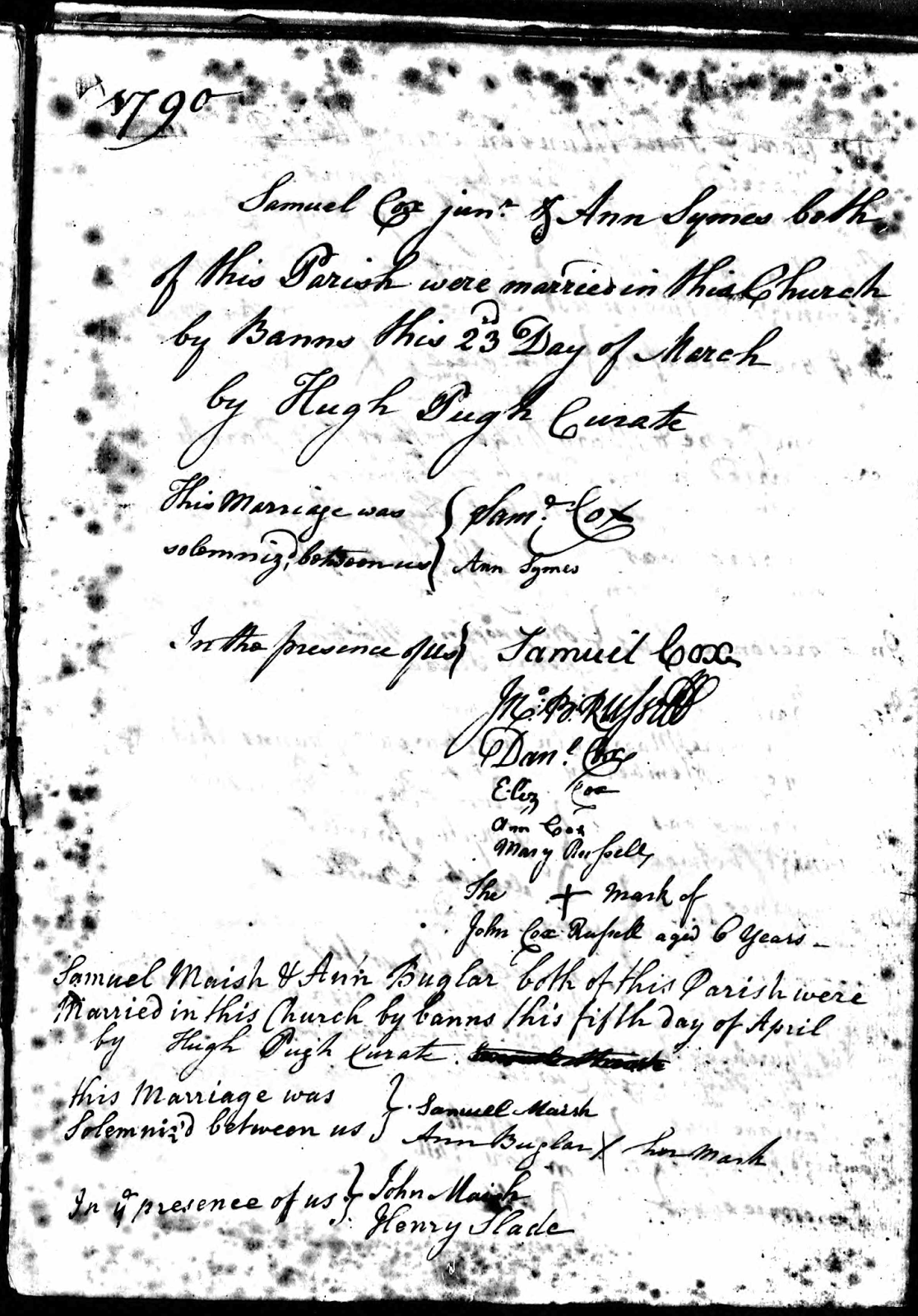 The History of Beaminster has an entire sketch on the Beaminster Manor House, "home of the old Beaminster family of Cox for many generations... The name is [first] mentioned in a transcript of the parish Register for the year 1585 when Robert, a son of Robert Cox, was baptized." (5) The author, Richard Hine, refers frequently to the work of historian John Banger Russell, a meticulous historian and collector who just happened to be Vertue Russell's father. The book is very carefully researched and assembled and refers frequently to original records--a gold mine for Beaminster researchers! I'm thinking he probably also assembled a good deal of genealogical information as well, tee hee.

The banns of marriage were announced for Samuel Cox the younger and Vertue Russell three times in Beaminster before they married on 9 September 1816, Samuel's 26th birthday. (6)

Hine describes renovations Samuel made to the manor house around 1822: "In the drawing room he placed a handsomely carved white marble mantelpiece of Italian workmanship, the sculpture of which vividly depicts scenes connected with the siege of Troy. This apartment was further enriched by a painted canvas ceiling representing the "Feast of the Gods" by Andrew Casali, an Italian artist born at Civita Vecchia, in 1720." (7)


It's not often we get to see how our ancestors' homes were decorated. I wonder if young Mary frolicked around this fireplace and was motivated to studied her history lessons because of the scenes of the Trojan War carved into it.

Nine also relates that: "When Princess Victoria, in 1833, passed through Beaminster, Samuel Cox, then a Cornet in the Dorset Yeomanry Calvary, had the honor of commanding the escort of Her Royal Highness from this town to Lyme Regis. Samuel Cox, Deputy Lieutenant and a Justice of the Peace for Dorset, was for more than [a] quarter of a century Chairman of the Beaminster Union Board of Guardians. On his death in 1860 the family estates passed into the possession of his eldest son, Samuel Symes Cox." (9)

I'm finding it nearly impossible to write about some of my favorite ancestors simply because I have too much information on them for one little blog post. So just be aware, family members reading this, that there is more information! And genealogists, there is more evidence, so hush, now. You'll be the first to know when I write "the book."

My husband's great-great-grandfather, Rev. Robert Fitzgerald Meredith (ca. 1815-1893), was born in Dicksgrove, near Farranfore, Co. Kerry, Ireland. (1) He was from a long line of Irish landholders, and several of his Meredith ancestors had served as High Sheriff of Kerry. (2) But the family nearly lost everything in the tumultuous nineteenth century, as many landowners did, when the taxes and cost of maintaining the land sent many of them scrambling (to bankruptcy court). I bet Dicksgrove was lovely in its time.

As far as I know there is no link to my own FitzGerald lines, but you can see in this map that Farranfore is only ten kilometers from my grandparents' ancestral homes of Castlemaine and Milltown, at the base of the Dingle Peninsula. I wouldn't be surprised to find that we are related, but I haven't yet been able to jump the 1793 chasm before which time it was illegal for Roman Catholics to keep records due to the Penal Laws.

Robert's father William was a principal lessor in Castleisland and Killeentierna, during the time of Griffith's Valuation. His over 3000-acre  estate, including Dicksgrove House, was offered for sale in the Encumbered Estates Court in June of 1855 but was later withdrawn. Some was sold in the Landed Estates Court, but finally in the 1930s the entire estate was sold to the tenants who had been farming it for years. Dicksgrove House was completely demolished but some of the stable buildings and gate lodges remain. (3)

Then, of course, in 1868, their mother, Mary Russell (Cox) Meredith, died. (7) She could have died from anything, but my first thought was it was probably from "puerpural fever" (complications of childbirth), but is it also quite likely she perished from exhaustion. I only had half that many boys and it was a challenge. Indeed, without the fine health care we enjoy today, I would have perished in childbirth.

Flash forward to 1881 when he has married Charlotte (8) and they have three children of their own, plus two she brought to the marriage! (9) Why, it's like an episode of Downton Abbey! Think of how far he descended the social ranks from the time he was born in 1815 to the time he married, gasp, a servant! So I'm going to call him by the pet name of Branson now.

These English ancestors left so many records in their wake it's an embarrassment of riches––so unlike my simple farmer ancestors. It becomes more a matter of compilation than sleuthing and analyzing. This little blog prompt of 52 Ancestors in 52 Weeks is serving its purpose in getting me to touch on some of those ancestors whom I've neglected. But there are wills, land records, and an incredible amount of riches ahead for me to explore in the Parish Chest.