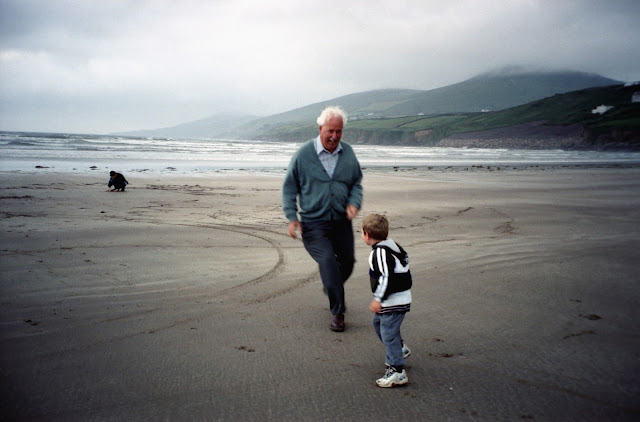 I am completely saddened to say that my much loved father-in-law, Brian, passed away four days ago. Being a genealogist, one of my first concerns was to pull together his death notice and obituary.

People often use the term obituary to refer to a death notice. They are not the same thing. The death notice is much shorter and serves just to give the critical information that someone has died, and to relay information about the funeral and burial. An obituary is longer, describes the person's life, family and loved ones, in as much detail as can be arranged, depending on cost or time. In modern times those are both paid notices. There are also cases in which a newspaper will decide to do an article on someone who has recently passed away at no cost to the grieving family. Some newspapers also call this an obituary, some do not, so it can get confusing.

Brian lived in England and procedures and wording are a bit different than in the States, but it is essentially the same. Here is the death notice the funeral home sent to local and national papers: 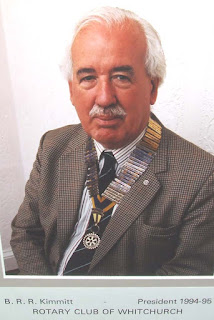 KIMMITT--Brian Robert Rowland. On 1st April, at the Countess, Chester. Brian, aged 85 years of Malpas, loving father to Myles and daughter-in-law, Polly, much loved Grandfather to Ryan, Nathan and Daniel, and great friend to Anne.

Funeral Service at St. Oswald’s, Malpas on Monday April 11th at 11am, followed by interment at Shocklach Church. Family flowers only please. Donations if desired to St. Oswald’s Church or Rotary Club of Whitchurch. Enquires to Rolfe’s, the Family Funeral Service, Whitchurch. Telephone (01948) 662209.

Rather stark, isn't it? Now below is the obituary I wrote for him. I kept to the facts and did not delve into his wit, humor or kindness because it was intended for a British (more conventional?) audience. But I feel it didn't really paint a proper picture of him. Perhaps the description of his personality has no place in an obituary. I don't know. When you're in the middle of grieving and arranging travel and funeral plans it's hard to get a sense of it all. But he sure led an interesting life.

Brian Robert Rowland Kimmitt of Malpas, 85, died April 1st at the Countess of Chester Hospital. The son of Lt. Col. Gordon Robertson Kimmitt and Anne Hill (Meredith) Kimmitt, Brian was born 28 January 1931 at the Woolwich Army Barracks in the East End of London.

He attended Lancing College, Sussex, and received a BA and an MA from Trinity College, Dublin University. As a young man he worked in various schools in Dublin, Birmingham and finally in Berkshire where he met and married Rosemary Churton on April 4th, 1957.

He joined the Colonial Office in 1959, then took his young wife off to teach school in Kenya. Son Myles was born there shortly afterward. His 21-year career in East and West Africa culminated in his appointment as Chief Education Officer to the Federal Government in the East of Nigeria where he founded a 1,000-pupil college and acted as Educational Advisor to the Federal Military Governor. After their return to England in 1980 Brian ran a small engineering firm in Shrewsbury, and retired in 1988.

A 50-year member of The Rotary Club (inducted in Tanga), he belonged to The Rotary Club of Shrewsbury then Whitchurch, where he served as president in 1994-95. There he chaired the International Committee for several years, instigating matching grants in Ethiopia and Tanzania with Water Aid.

Always keen on the outdoor life, he climbed Kilimanjaro four times, and walked to the peaks of Mt. Kenya three times. He played most sports, but particularly enjoyed tennis and sailing. He owned two Cessna airplanes and clocked up a thousand hours as a private pilot. He was a Lay Reader in the Church of England for many years.

A widower since 2001, Brian devoted his time to church activities along with his volunteer work with the Masons and the Rotary. He enjoyed socializing and traveling with his companion Anne Proudlove. Since 1990 he has spent two months a year with his son’s family in America and loved watching his grandsons grow up.

Funeral services will be held April 11th at 11:00 am at St. Oswald’s church in Malpas. In lieu of flowers donations may be made to: The Rotary Club of Whitchurch (http://www.surftech.co.uk/rotary/Main/index.htm). 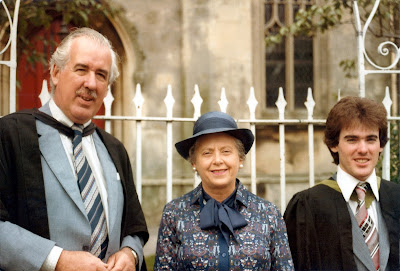 Okay, he did a lot of interesting things, but we still don't get a sense of him as a man. But I have a blog, and though my blogger expert friends would tell me this post is too long, well, it's my blog and I'll write what I want to! Brian lived a long full life and there's much to be said.

What I really wanted to talk about was how he welcomed me into the family so warmly. He was a charmer, and gracious, and was able to set anyone at ease (except, perhaps, naughty grandsons). Before Myles and I were married we visited his parents, and every morning Brian would bring me a cup of coffee in bed! I took this as an excellent predictor of boyfriend's future behavior. An equal and opposite action in the evenings was delivery of a perfectly crafted gin and tonic, with just enough bite in it to make the conversation flow. He would then regale me with stories of their time in Africa and the joy would radiate across his face.

Brian loved family, especially children. He doted on only son Myles and often said he regretted they were unable to have more children. He and Myles called each other Gully, a remnant from something in Myles' childhood. He taught Myles everything there is to know about mechanical bits, plumbing, car engines, world travel, home repair, and most of all, how to be a gentleman. He never spoke badly of anyone and never cursed. He was quietly religious and spent many years being a lay reader, often "taking the service" when the local vicar was off somewhere, and I can attest that his sermons were very well written and executed. He had a lovely singing voice and we even sang a few Hallelujah choruses together driving around in Massachusetts.

Brian and Rosemary came to stay with us for two months of every year until Rosemary's death in 2001. While I found it extremely challenging to have household guests for that length of time, it nevertheless gave us two additional guiding minds to help our boys grow into the fine fellows they are today. Granny and Granddad had strict standards of behavior (and not just for the kids!), and we encouraged them to make their opinions known to the boys. Once we had small children running around, the evening cocktail received a new nickname: "anti-buggering fluid," as in, "give her some anti-buggering fluid," which meant that Mom was wound up at the end of the day and needed calming. At that point, though, I had to keep my wits about me, however much I might have wanted to fade out a bit, and that put Brian's nose out of joint--that I wouldn't join him in a long slow cocktail at dusk. When you have three hungry boys clamoring for food and a dinner for four adults to put on you can't indulge! 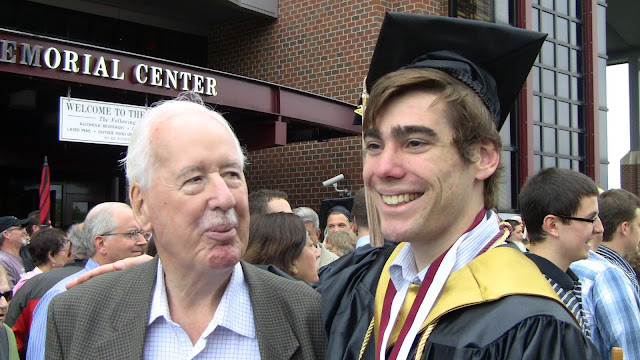 Brian rejoiced in the accomplishments of his son and grandsons. When Rosemary died in 2001 Myles' office sent us a nice potted plant that flourished (we still have it!) and he never failed to remark on how highly Myles' boss must have thought of him to send such a potted plant. To him that plant represented compassion, reward, and admiration, even. As for the grandsons, he adored them beyond measure. Once they got big enough for him to get a good hold on, and that didn't take long, he never let go. He fed them their "bops", gave them baths, read stories, tucked them in, played Monopoly, watched baseball, cheering on the Boston Red Sox in their World Series win after an 86-year lag in 2004, and rejoicing as much as any local fan did. He attended their baseball games, graduations, their violin concerts, anything they had on when he was here. His big regret was not being able to make the trip last year to see Daniel graduate. Being an educator, he was thoroughly pleased with the fine education the fellows received at St. John's High School, and appreciated the input they had into turning them into fine young men. 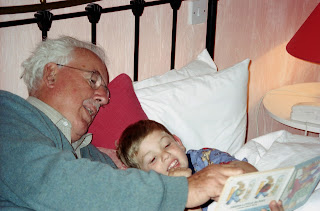 He used to get his battle gear on when companies made mistakes or treated him badly. He was furious at American Airlines for canceling their direct Boston-Manchester flight and engaged in a protracted letter-writing campaign with them for years! He complained to the CEO. ticket agents, the air hostesses, the phone reservationists, anyone representing the company! Probably the baggage handlers, too. He once told me I didn't write enough angry letters!

After Rosemary passed away Brian was bereft. He moved to a smaller house in the sweet village of Malpas and took up a close friendship with Anne Proudlove. Anne provided much needed companionship and cheerful conversation and he brightened up and began to live his life as before. He adored her. He continued to come visit us, sometimes dragging Anne along, and even bought a condo so he could have his own "digs" nearby. He loved that place, and would wax on about how the wisdom of the realtor who found it for him, the fine view from his deck, the cherry trees, and how loud the fridge was.

I lost my father only two years after I met Brian but he happily stepped in as a substitute dad for me, and I loved him for that. I couldn't have asked for a better father-in-law. Rest in peace, Gully. 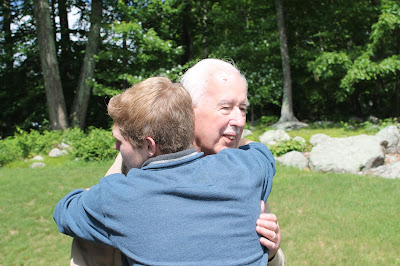 Happily, the local newspaper wishes to send a reporter out to talk to us to get a fuller picture of the man. Perhaps then we will get the right proportion of facts and emotional impact. When that is published I will post it here.