Justice of the Peace Records and Silvanus "Who's Your Daddy" Savage, Part 3 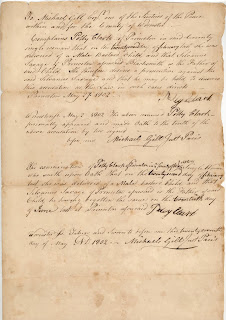 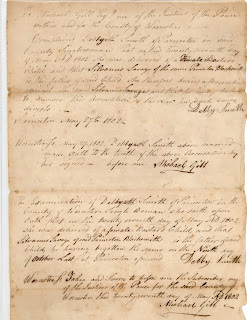 ...in which we've seen the originals and transcriptions of two separate complaints of paternity sworn against one man, Silvanus Savage. The two complaints were sworn on the same day, 27 May 1802, in Princeton, Worcester County, Massachusetts, to a Justice of the Peace name Michael Gill. First, Debby Smith fesses up on the same day she delivers a baby girl. She was very likely interrogated during her labor. Next thing you know, Polly Clark chimes in, accusing Silvanus of fathering a son she had borne on the 22 February previous. Both women give the date of conception: Polly was first, on 20 June 1801, and Debby on 9 October 1801, both in Princeton.

What was the impact of these two births upon Silvanus Savage and his descendants? What constraints did the law place upon Silvanus? Was he whipped, fined, imprisoned? How old were the women at the time, were they under age? Contemporaneous sources should be consulted to ascertain whether the births were correctly registered, and whether any of these four people (Debby Smith and her daughter, and Polly Clark and her son) reappeared in Silvanus Savage’s life at any later time.

Princeton’s Boundaries and Jurisdiction
1759, set off from Rutland
1771 Incorporated as a town
1810 Part of Hubbardston annexed
1838 Part of unincorporated lands known as “No Town” annexed
1870 Part of Westminster annexed

Justices of the Peace

In Massachusetts the Justice of the Peace was the official to whom minor complaints were made. He was entitled to take depositions, impose fines, order property seizures, perform marriages, and try small cases (no jury). Since this lowest court was usually held in the justice’s home, the resultant records are scattered about in repositories and private collections, and are extremely difficult to locate. These complaints would initiate a subsequent court case, so a search in the Worcester County Courthouse may prove fruitful.

Sanborn’s book covers Essex Co. 1692-1744 and contains hundreds of unrecorded marriages. Though the county is different, and time period earlier, the law did not change substantially. She also has a useful discussion on Massachusetts law on illegitimate births in which she reveals, for example, that a disproportionate number of servants, African-Americans and Indians are represented in these types of cases. In addition, she states:

"In the case of an unmarried woman, the law required that she state when, where, and with whom she conceived the child, and whether she had any other partners. The midwife and another witness were to repeatedly question the mother during her labor, asking her to name the father. It was believed that while facing death in labor, the mother would not lie. Even if the accused father denied he was such, he would be convicted..."

"People found guilty of fornication could be fined, or whipped, or both. The fines varied... but were generally higher if the unmarried man named was from some other jurisdiction, or if the woman refused to name her partner. The assumption in the latter case might be that her partner was married and she was protecting him from the much more serious charge of adultery. Repeat offenders were sometimes not given the option of a fine, but simply whipped."

"Unmarried fathers were ordered to pay maintenance charges on a child through its sixth birthday. At that time, the child was eligible to be put out into service and would no longer be a charge on the town if the mother could not support it."

Legal Considerations
According to Blackstone, a "bastard" in the legal sense of the word is a person not only begotten, but born out of lawful matrimony. Had Sylvanus married either of these women, her child would have been born legitimate. Bastard children are entitled to maintenance from their parents. To protect the public from their support, the law compels the putative father to maintain his children. We would want to search for some evidence of both Silvanus’ payments to his children and whether or not he was sentenced.

Considered as nullius filius, a "bastard" has no inheritable blood in him, and therefore no estate can descend to him; but he may take by testment, if properly described, after he has obtained a name by reputation. But this hard rule has been somewhat mitigated in some of the states where, by statute, various inheritable qualities have been conferred upon bastards.

"Bastards" can acquire the rights of legitimate children only by an act of the legislature, therefore legislative records should be consulted, perhaps twenty or so years after the births until approximate period of parents’ deaths.

The illegitimacy of these children makes genealogical research more complicated and it would be essential to check the court records for further proceedings against Silvanus and/or the mothers. Did either of these children ever try to establish heritable rights with either parent? A search of probate and guardianship records could indicate the succession of any land Silvanus might have possessed. Did he ever marry? Was his will contested by either of these children?

More Questions
Was Silvanus a Native American, servant or African-American? What names were the babies given? Did they grow to adulthood and produce families? Did they try to claim on property or probate? Did the mother’s go on to marry other men, have other children? It would be essential to follow the census records and see if the name Savage appears in Princeton. Vital records are essential as well.

The data in this record is of varying reliability. It was given contemporaneously with the events, by women who most definitely would have known the truth, and therefore it would be considered of high quality. When analyzing documents we usually make the assumption that people are telling the truth. However, these women were in a highly vulnerable state. It would be in their interest to accuse any man of fathering a child so that they would not be alone in the support of the child. Whether they named the correct father or not would depend upon their state of mind at the time. There are at least two reasons for naming the correct father: hope of coercing him into marriage, and basic honesty (fear of Divine retribution). Yet there are incentives to naming another man as father: revenge for some past act, hope of cornering a more desirable man into marriage, possible drunkenness at the time of the conception, and perhaps even hysteria. In any case, they were biased and their testimony should be questioned.

The two records would therefore vary in reliability. Debby Smith swore on the day she gave birth, probably whilst in labor, that Silvanus Savage was the father of her child. Midwives were encouraged to drag the name of the father out a laboring unwed mother’s pained lips. So Debby could have just succumbed and told the truth, she could have blurted out the name of some man she didn’t care for or she could have named one she coveted. There is really no way to ascertain the level of truthfulness, so we just assume truth.

Polly, on the other hand, swore out her complaint two months after having given birth. And she swore it on the same day that Debby had her baby and Silvanus was named as father. Polly, in essence, jumped on the Silvanus bandwagon. Further research into court records may or may not reveal Polly’s real motivations

This is an original source containing primary information and providing direct evidence of the fact that these mothers claimed Savage as the father of their babies. It is also direct evidence of the birth dates of the babies, and the names of the babies’ mothers. It tells us that Silvanus Savage was a Princeton blacksmith in 1802 and that he had been in Princeton at least on 20 June 1801 and 9 October 1801, if the women were telling the truth, and we assume they were. It also places the women in Princeton on the dates in their depositions.

It does not provide enough evidence to state that Silvanus was the father of either child, however. A search for court records might reveal whether Silvanus was ever sentenced, whether he paid support for his two babies and whether he ever married either of the women, but we will never really know. We can only assume, based on the weight of the evidence.

This case cries out for DNA follow-up.

Check for previous studies in the literature on Silvanus Savage. Start with, Jeremiah Lyford Hanaford, History of Princeton, Worcester County, Massachusetts; Civil and Ecclesiastical; from its first settlement in 1739, to April 1852 (Worcester: C. Buckingham Webb, 1852).

Locate all relevant censuses from earliest to last one of children (1790-1880) on Ancestry.com, HeritageQuest (accessible at participating libraries), and at NARA Waltham facility.

Were the births properly registered at the time, specifically listing both parents? What surnames were the babies given? Did they live to adulthood? Did either one name a child after him? Whom did he eventually marry? Did he have other children? What did he name them? Search for births, marriages, and deaths in MAVital Records to 1850 online, and in VR Tan Books series for Savage, Smith, and Clark. Search in the “Massachusetts Vital Records1841-1910” online database at the New England Historic Genealogical Society (NEHGS).

Were there any court cases filed against Silvanus for these two illegitimate births? Did he get charged with a crime, serve punishment and/or go on to support them? Was he accused of the same or any other crime by anyone else? Were either of the mothers accused of a crime or obliged to pay support? What are the implications for land and probate: did the babies later contest Silvanus' will, even though they were not eligible to inherit? A trip to the Worcester County Courthouse, is definitely in order!

Examine newspapers of the time. The American Antiquarian Society holds a wealth of original newspapers. Also check online databases such as GenealogyBank.com and Newsbank, 19th Century Newspapers at NEHGS.

Look into church records. See if there was a permanent minister in Princeton. Did he keep a diary? Is there a diary from anyone in town at that time? The Congregational Library in Boston has a wealth of documentation on early churches. Examine cemeteries, look for their graves and note how their burial plots are laid out.

Consider DNA testing for any known descendants of Sylvanus, Debbie, and Polly.

You can see there is plenty to do-- I've generated a huge research plan with just these two documents. Justice of the Peace records reveal the most intimate details of people's lives. These three young people lived over two centuries ago, yet their troubles are timeless. In any case, let us hope that babies, mothers and even Silvanus, managed to pull together a happy life, despite the setbacks.
Posted by Polly F. Kimmitt at 9:04 PM No comments: Links to this post