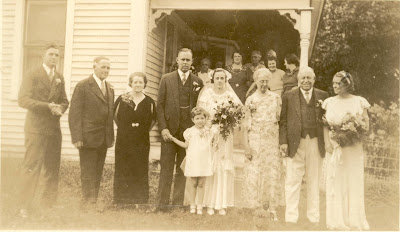 My mother's collection of photographs contained this gem, but I do not know who the people are, with the exception of "Mr. & Mrs. Barnes." Can anyone help?
Posted by Polly F. Kimmitt at 10:18 PM 4 comments:

Christmases Past - Trees I Have Loved 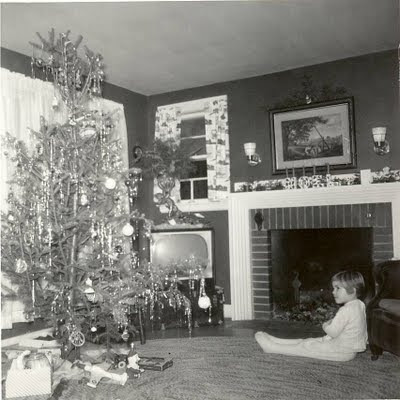 I've been using this photo as my profile picture on Facebook recently because it represents the magic I always felt as a child at Christmas. This was taken in 1959 when I was four. It was after Christmas because the gifts had been opened. It is the only photo I have of myself at Christmas, ever. In reality I think the occasion was actually the annual screening of The Wizard of Oz on TV. They always showed it on the Sunday night between Christmas and New Year's.

I used to get revved up in a complete frenzy of anticipated delight. It was the only children's movie I had ever seen and I loved, loved, loved it, even though the Wicked Witch of the West scared the wind out of me. I don't think I dared uncover my eyes until I was about eight or nine years old! Anyway, you can see the big upholstered chair near the fireplace. My father sat in that religiously, but abandoned it for the Wizard of Oz. Part of the evening's thrill was that I got to sit in Daddy's chair. We'd always have a big fire in the fireplace on Sundays, and that night we'd re-light it for the show. They probably took this photo of me because I was already psyched for it to start. This particular night, my mother stoked a bunch of logs and got a rip-roaring fire going. I don't know what happened to the fireplace screen, but at some point, a tiny ember made its way onto the big chair so that when I climbed into it, I got a stinging pain in my bum!  I must have screamed and cried, but all I remember is being highly insulted that the chair had bitten me, and then laughing with teary relief when I found out what it was and put my finger through the hole it left. My poor parents.

At the moment the photo was taken, I was gazing upon the tree with loving wonder. You have these childhood memories of big glorious trees with bright lights, shiny ornaments sparkling and glistening. Not quite what the photo reveals. Looking back on it now, we had some pretty pathetic trees. I just didn't realize it. My frugal father was not into wasting money on a tree when we could just go out in the woods and get our own. Problem was, living on the South Shore of Massachusetts meant there was not an abundance of what we think of as Christmas trees. Not quite the scrub pines of Cape Cod, but no great majestic evergreens of Northern New England or Canada, where most of us now get our Christmas trees imported from.

Instead, what we ended up with was a spindley white pine that could barely hold ornaments. I didn't even notice when I was little, but probably about the same time I figured out the Santa deception, when I looked to the trappings to produce the magic for me instead of Santa, the white pines didn't cut it. Ever stuck in the middle, my mother would buy a tree and tell my father she had paid only a quarter of the price she had actually paid, just so I could have a wondrous tree to behold. They got better and better in reality over the years, but the ones I saw in my early childhood can never ever be topped, except by an angel!
Posted by Polly F. Kimmitt at 9:19 PM No comments:

Mt. Hope Cemetery, in the West End of Scituate, Massachusetts, is my favorite cemetery, and someday I hope to have my ashes buried there, beneath the soft pines. I have lots of ancestors and other relatives buried there, from parents and brother to GGGG grandparents, two of whom I discuss here. I just love how by researching a little bit a few scant letters carved into a piece of stone two hundred years ago can open up a window into your own past. My GGGG grandparents, James and Elizabeth (Litchfield) Litchfield are buried in the oldest part of the cemetery, towards the back. 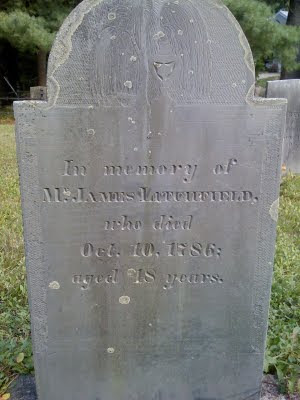 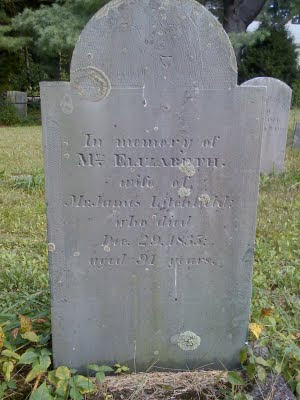 Despite the 49 years difference in their ages at death, these stones appear to have been carved by the same carver. They are the same size and have the exact same willow and urn decoration at the top of the stone, s well as exact side borders. And this stone carver was punctuation-happy! Not only is he rather free with commas, but he loved him a good colon! He uses capitals and italics in exactly the same way, so we are sure it's the same fellow.

About the Urn and Willow

This is motif that was most commonly depicted in the late 18th and early 19th centuries, when classicism was at it's height, and death was thought of in a more secular way, as opposed to the old deaths heads and cherubs used earlier. The willow and urn was popular for quite a long period, so precise dating by gravestone symbols is not possible. It is unlikely that James' gravestone was erected at the time of his death, though, because that was quite early for the urn and willow, even in Boston, and Scituate is a good 30 miles away. It took some time for the designs to spread out into surrounding communities. It is more likely that at Elizabeth's death, someone had both stones carved and erected.

There were billions of them, mostly congregated in the area near this cemetery. I haven't even begun to delve deeply into mine, but they are the ones who cause the most pedigree collapse in my tree. Elizabeth, wife of James Litchfield, was also a Litchfield: they were second cousins. Then, their daughter Hannah Litchfield, married Capt. Daniel Litchfield in 1806 and here we have the explanation of any odd traits in our family tree! We have the Litchfield hump, the Litchfield twitch, the Litchfield flinch... just kidding! The Litchfield wandering eye, the Litchfield stutter...

My aunt, Abbie Herberta (Barnes) Thompson, recently loaned me a most precious book. She had it bound herself, in 1981, from five incredibly detailed, accurate and useful pamphlets on the Litchfields written by Wilford Jacob Litchfield from 1901-1906. I promised my poor Auntie that I would index this tome and got started on it before going for certification, then I put it aside, but I must take it up again, because it's an incredible volume. Anyway, in it can be found transcriptions of all sorts of supporting documentation such as wills, deeds, warnings out, vital records, correspondence, diaries and more! It's a treasure trove. I just want to give a few tidbits here about my gggg grandparents. 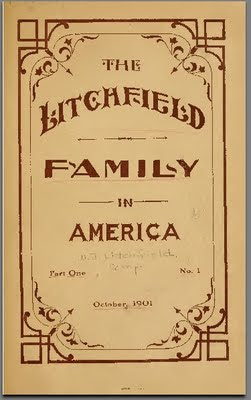 He was born in Scituate 10 February 1738. He was sometimes called Joseph Brine or Joseph Jr. to distinguish him from his cousin Joseph, born 1734. The brine part I'm not sure about, but suspect either he spent time at sea or drank too much! . Not a lot is known about his first wife, Anna Gordon who he married in 1760. They probably had two daughters, Susanna and Anna, but the author had only just learned of them, and I'd like to study that a bit.

James served in the Revolution and on town government (Highway Surveyor 1771, Hog Reeve 1773 and 1776) and in the Litchfield pamplets [p. 376] is described by a descendant as being: "a man of temperate and industrious habits, of mild and retiring disposition, but much beloved. He was a farmer and a carpenter... It appears that he did not take an active part in local affairs, the care of a large family occupying his attention and strength until his untimely death." Regarding his death, the pamplet also states on p. 377, "It was upon this property that James was building a new house when overtaken by his fatal sickness." Oh, sickness? Really? Because later we find this tidbit of a footnote: "It is a common saying that his early death was caused by an illness resulting from an injury to his head made by his brother, Lothrop Litchfield, while the latter was in an intoxicated condition. James was engaged in building his new house at the time of the alleged assault." I love this author because he clearly tells us it is just gossip, but hmmmmmmm. Maybe it should have been Lothrop Brine!

Finally, we find that "At his grave there was placed in 1897, through the efforts of a great-grandaughter, Mrs. Mandana (Clapp) Morris of North Scituate, a bronze marker of the Sons of the American Revolution. All descendants of James Litchfield are entitled to join a society like the S.A.R." Mandana happened to live next door to my GG grandparents, Israel Merritt Barnes and his wife (Olive Litchfield) Barnes, who named one of their daughters Mandana after their neighbor and Olive's cousin.

Elizabeth was James' second wife. Elizabeth was baptized at Scituate on 4 November 1744, and she and James were married on 7 January 1770. On page 380 we read: "She is described by her grand-daughter, Mrs. Elizabeth Litchfield (Merritt) Merritt (born 1812, died in 1905), as a woman of sedateness and hospitality, and very highly patriotic. When the tea was thrown overboard in Boston harbor, it is said that Mrs. Litchfield threw her tea-pot against a stone-wall, breaking it, thus manifesting her displeasure at the levying of the hated tea-tax. After the death of her husband, leaving a large family and unfinished home on her hands, she had a part of the structure made habitable and there she brought up her family in an industrious and frugal manner. Lawrence, her eldest son, lived in the same house, and cared for his mother in her declining days. It is said that she was a remarkable woman for her time."

As a matter of amusement, look at this, available only in India! And you get a 61 Rupee discount:

The Litchfield Family In America

Imported Edition.Order now and get it in 14-21 business days. See Details