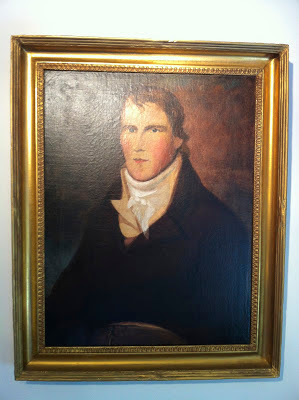 My seaside hometown of Scituate, Massachusetts has a Maritime and Mossing Museum that features not only fascinating displays about the 19th-20th century Irish mossers, but exhibits on Scituate seafarers from earlier times as well.

A fabulous oil painting of a sea captain was identified to me on one visit only as Capt. Vinal. I was hoping it might be a sea captain ancestor of mine (we have the same rosy cheeks), but later discovered he was Capt. Ezra Vinal, who had died at sea. I have no Ezra Vinals in my direct line but wanted to find out if we are related. I was named after a Polly Vinal after all! (I'm so glad they didn't name me Polly Vinal FitzGerald ––"Just call me Pollyvinyl: tough but resilient.")

I consulted FindAGrave, where a C. Krueger had written a short biography with basic citations, and uploaded three images: two pages from the printed vital records of Scituate, and a death announcement from the 14 September 1821 issue of the Haverhill [Mass.] Gazette, which states: "On his passage from St Jago to Boston, Capt. Ezra Vinal, of Scituate, aged 47."[1]  Krueger's biography gives Ezra's birth as 20 January 1774, in Scituate, child of Joseph and Thankfull. He gives Ezra's death date as 16 August, 1821 and says his body is buried at sea. Seems fairly solid, and no reason to doubt it so far.

The published Scituate Vital Records mention only one Ezra Vinal in the deaths: "VINAL, Ezra, Capt., _____, 1821, a. 47, at sea." So far, so good! Of course we'll want to check with the original records, but as a guideline we're okay for now. There are quite a few Ezras in the births, but only one born anywhere near 1774, and that is the son of Joseph and Thankful, as Krueger has mentioned.   Joseph Vinal and Thankfull Vinal (sic) were married on 8 November 1763. The Scituate VRs also provide the marriage of "VINAL, Ezry [int. Ezra] and Polly Hammon [int. Hammond] on 27 October 1800, citing the records of the First Church of Scituate. [2]

So let's add a bit o' conflicting information to stir things up a bit. Strap on your cerebral seat belts. Deane's History of Scituate mentions only one Ezra Vinal, a captain, in a family sketch. Deane's syntax is often confusing and ambiguous and sometimes downright incorrect. In this case he writes, "[Vinal] Joseph, married Martha Jenkins 1745. Children, Joseph 1749, Asa 1753, Martha 1756, Capt. Nathaniel (whose son is Dexter) and Capt. Ezra, who died at Matanzas, leaving children in Scituate." [3]

What? Different parents, different birth date, different time frame! So what is going on here? Is this a different Capt. Ezra, with each Capt. Ezra Vinal only mentioned once in each source? Or are there just serious errors in our sources?

Ezra #1 was born 20 January 1774, son of Joseph Vinal and Thankfull Vinal who were married 8 November 1763. Both events are listed in the Scituate VRs. His death in 1821 at 47 reported in the newspaper is consistent with this date of birth.

But that conflicts with

Ezra #2, Deane's Ezra, the son of Joseph Vinall and Martha Jenkins who were married in 1745. This Ezra is not listed in either the published vital records or the Scituate town records online at Ancestry.com. [4]  He would have born about 30 years after their marriage if he were 25-ish when he married Polly. Yet Deane says these are his parents. But I propose that he just morphed the children of two Joseph Vinals together and attributed the parents of Ezra #1 incorrectly, thereby creating massive confusion in online trees and forcing people like me to untangle it all. This is not the first time Deane has inconvenienced me in this manner!

Krueger mentions an article in the Columbian Centinel but provides neither any detail from it nor a citation. I located the article he referenced: "Died...On his passage from St. Jago to Boston, Aug. 16, Capt. Ezra Vinal, of Scituate, aged 47, master of sch. Indus." [5]   So this is where we get the exact date of death, Ezra's age, and his ship, as well. [6]

Another article reveals a bit more: "Deaths...On the 16th ult. on his passage from St. Jago to Boston, Capt. Ezra Vinal, of Scituate, master of schooner Indus. He has left a wife and family to lament his untimely exit, and irreparable loss. Capt. V. was an industrious and enterprising member of the community, and an experienced and correct navigator. Although death has arrested him in his mortal career, far from his family and friends, and consigned his remains to a watery grave, they still have the consoling asurance, that he was a firm believer in the gospel of our Lord and Saviour Jesus Christ, and a convert to the truth of that divine precept, which declares that "every one and in every nation that feareth God and worth righteousness, is accepted of him."[7]

In June of the year he died the New York National Advocate printed a notice: "At Quarantine, schr. Indus, Vinal, from St. Thomas." [7]  And in another revealing article, from September, we read, "Arrived at Quarantine, sch. Indus, Wilkinson, (late Vinal, who died 5 days out) 29 days from St. Jago de Cuba, cargo sugars, to P. and T. Curtis.––Schr. Hope, Briggs, for Boston, sailed 9 days before. Capt. Mayhew, of Schr. Native, died day before the Indus sailed. It was very sickly at St. Jago." [8]

So where is Matanzas? Let's keep digging. If you go look at family trees on Ancestry.com not only will you find the same confusion about Ezra's parents, but also about his place of death. Quite a few of those trees supply a place of death as "Matanzas, Sea, Sulawesi Tengah, Indonesia."  Well, like St. Jago [Santiago], it turns out that there was more than one place by that name.

There is a Matanzas in Indonesia, but there is also one in Cuba, a much more likely destination for Capt. Ezra in general, and consistent with the St. Jago mention in the articles, just at the opposite end of the island. We researchers need to be so careful about information found in public trees! They are created by people who vary greatly in the attention they pay to detail. Add to that the fact that sometimes software will auto-complete a locality for you and you end up with Indonesia instead of Cuba! Don't think that just because you see this information in more than one tree it must be true. Incorrect information proliferates as quickly as correct!


So, summing up, C. Krueger's information was correct, but we could not know that without investigating his incomplete sources and resolving the conflicting information from Deane. We now know that Ezra Vinal, son of Joseph Vinal and Thankfull Vinal, born 20 January 1774, was captain of the schooner Indus when he passed away, enroute to Boston from St. Jago (Santiago), Cuba. He left behind a wife and family. I'd want even more corroboration, through land and probate, church and other records, but the above is enough to prove that Deane was mistaken.

His death was likely caused by illness, not accident, as evidenced by the repeated quarantining of ships during that summer. Diseases of the time for which a ship would be quarantined might be cholera, yellow fever or even plague! A ship would be detained in total for 60-65 days. [9]

3. Samuel Deane, History of Scituate, Massachusetts, from its first settlement to 1831 (Boston: 1831; reprint, Scituate: Scituate Historical Society, 1975), 365. Deane is known to have inaccuracies in his history, and his family descriptions can get very grammatically complicated and confusing.