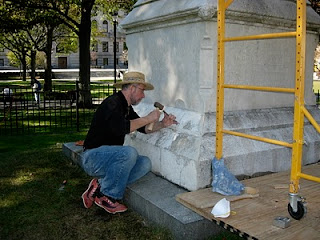 A few years ago our DAR chapter organized a ceremony to celebrate the restoration of a monument erected to our chapter namesake, Col. Timothy Bigelow. One of our members, Kay Kingsbury had worked for years to bring the project to fruition and for her preservation work she was recognized by the National Society as tops in New England.
Timothy Bigelow was a blacksmith in Worcester who raised a company of Worcester men and fought long and hard in the American Revolution. He died penniless in a Worcester jail. I won't say much about him now, but thought I'd include the few words I was asked to say on that occasion, as Regent of the Col. Timothy Bigelow Chapter.

Heavenly Father,
Grant us the wisdom to consider our past. In every age, You call upon us to defend the human family from oppression, tyranny, and evil. Since our founding as a nation "conceived in liberty," countless Americans have stepped forward to defend these principles.
We gather today to remember Col. Timothy Bigelow, Worcester’s greatest soldier... It is good to commemorate brave deeds. It is an homage due to our heroic dead, and it reminds the living of the courage and self-sacrifice of earlier champions of our freedom and independence... Monuments are silent monitors, richly eloquent in the teachings of a bygone age... By honoring Col. Timothy Bigelow, Worcester honors herself. Help us to remember that what great Americans have achieved, we are expected to guard and maintain.


We ask Your blessing on all veterans past and present, and we pray for our troops and their families, and for the peace we all seek. Amen.
Thanks to Kay
On behalf of the Colonel Timothy Bigelow Chapter, Daughters of the American Revolution, I would like to thank Kay Kingsbury for her tireless efforts in the enormous project of the restoring this monument. She has been relentless in her pursuit of recognition of Colonel Bigelow, and is a great friend to the city of Worcester. Thank you, Kay!

This monument was first erected 147 years ago. It was dedicated, 86 years after the Battle of Lexington started the Revolutionary War, on April 19, 1861. The dedication was not a small affair. Buildings throughout the city were festooned with red, white and blue bunting. Spectators thronged the streets. It was more than a ceremony to them. It was a remembrance of the sacrifices made by their ancestors to secure their freedom. And it was a patriotic rally, since at that moment, Worcester’s troops were enroute to the South, eager to do battle for their country’s imperilled rights in the Civil War. Sentiments were strong, and the air was thick with patriotic fervor. They did not take freedom for granted.

A cortege of carriages paraded through the streets, carrying honored guests such as present and past Mayors, ex-Governor Lincoln, Stephen Salisbury, Col. Lawrence Bigelow, and countless other dignitaries. They were accompanied by Captain Waldo Lincoln’s Company D, fire engines, hose companies, several bands, and Father Mathew of the Temperance Society. There must have been a lot of noise and activity on that April day as all were cheered on by the citizens of Worcester.

Today, our gathering is more modest, but we are here because we do not forget the sacrifices made for our benefit.

Benediction
Let Us Pray
Lord, protect us each and every one.
Inspire us to be peaceful on this planet we call home,
for all the world is our family.

We give our heartfelt thanks for America's independence
So courageously fought for and won, because of the bravery and strength shown by men like the one we honor here, Col. Timothy Bigelow.

With appreciation for others having cleared the way, ...
for a land of opportunity where freedom is a given for all...
We give our humble thanks.

Finally, we again ask Your blessing on all veterans past and present and we pray for our troops and their families. Amen.

I'm related to Timothy Bigelow, Junior through his wife's Prescott family. I remember growing up in Holden, and my Dad taking us to see this monument on the common. He used to work on Main Street, quite nearby. There was another ancestor buried there in the cemetery. We would get McDonalds and eat it on the common together, and I had a summer job in the mall (now gone)behind the common.