Justice of the Peace Records and Silvanus "Who's Your Daddy" Savage, Part 1 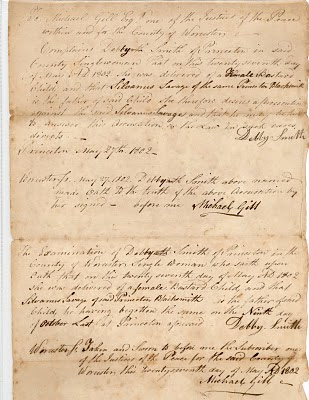 
Justices of the Peace
In Massachusetts the Justice of the Peace was the official to whom minor complaints were made. He was entitled to take depositions, impose fines, order property seizures, perform marriages, and try small cases (no jury). Since this lowest court was usually held in the justice’s home, the resultant records are scattered about in repositories and private collections, and are extremely difficult to locate. These complaints would initiate a subsequent court case, so a search in the county courthouse may prove fruitful.

I'm lucky enough to have a good friend who is a historian with an encyclopedic mind and a great collection. When it came time for me to prepare the "applicant-supplied document" in my certification portfolio, he came up with two delicious documents for me to analyze. I will blog about them separately so as not to make my posts too long, but they are interrelated. I love them for the genealogical questions they bring up and because you can almost feel the emotions they generate.

They concern two distinct complaints of paternity sworn by two women against the same man on the same day! And the man has the self-fulfilling name of Silvanus Savage. Being a respectable woman and all, I can't tell you the translation from Latin form into Anglo-Saxon, but it makes me laugh.

A Complaint of Paternity: Debby Smith vs. Silvanus Savage1

"Τo Michael Gill Esq. one of the Justices of the Peace
within and for the County of Worcester––

Complains Debbyah Smith of Princeton in said
County Singlewoman That on this twenty seventh day
of May AD 1802 she was delivered of a Female Bastard
Child and that Silvanus Savage of the same Princeton Blacksmith
is the father of said child   She therefore desires a prosecution
against the said Silvanus Savage and that he may be held
to answer this accusation as the Law in such cases
directs.
Princeton May 27th 1802 –             [original signature] Debby Smith

Worcester ss. May 27. 1802. Debbyah Smith above named
made oath to the truth of the above Accusation by
her signed –– before me   [original signature] Michael Gill

The Examination of Debbyah Smith of Princeton in the
County of Worcester Single woman who saith upon
oath that on this twenty seventh day of May AD 1802
she was delivered of a female Bastard Child and that
Silvanus Savage of said Princeton Blacksmith  . is the father of said
child, he having begotten the same on the Ninth day
of October Last at Princeton aforesaid.
[original signature] Debby Smith

Worcester ss. Taken and Sworn to before me the Subscriber one
of the Justices of the Peace for the said County of
Worcester this twentyseventh day of May AD 1802
[original signature] Michael Gill”

To be continued!
Posted by Polly F. Kimmitt at 4:46 PM