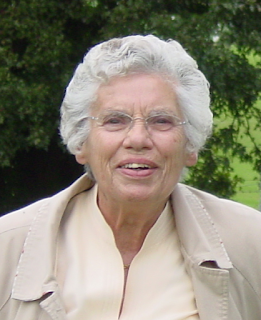 We lost Myles' Aunt Sheelagh (Auntie Tealy) a few weeks ago. She was precious to us and to everyone who ever knew her. A highly unusual example of a completely selfless person––tolerant, kind, nurturing, hard working, capable, and fun! Here is the tribute I read at her funeral last week, on June 8th at the Chester Crematorium. Sadly, her church, St. Mary Without the Walls in Handbridge, was closed for repairs.

There is so much more to her than I was allowed to delve into in the precious six minutes I was alloted, but you get the gist. The majority of it was written by Teals herself. I just interjected here and there. I didn't mention her sense of humor. She had her feet planted firmly in the world of fun and enjoyment, so she was just a great person to hang around with. The vicar pointed out that another thing I missed was her incredible stillness. She NEVER got flustered, ever. Never got angry. She was never gossipy or hateful or jealous. She just existed to please others and in doing that, pleased herself and her God. 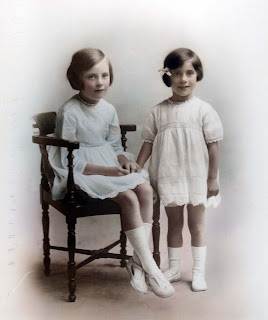 Sheelagh once said “I can’t imagine a world without me.” Well, Teals, neither can we!…

Anyone who knew Sheelagh knew she was highly efficient. So it won’t surprise you to know she provided me with her obituary over 25 years ago! It’s how she wanted to be remembered and I am honored to be the one to present it, with a few tweaks, on this solemn occasion.

Sheila Leslie Churton, born July 9, 1925, premature and weighing just under 5 pounds, was teeny. When big sister Rosemary tried to say teeny, it came out Tealy. And the nickname stuck—for 91 years. It seemed everyone had a pet name for her—Churt was another big one. Professionally she was known as Sister Churton. And to everyone else she was just Sheelagh. But despite what it says on her birth certificate she did not spell it in the conventional way. Instead she adopted the Irish spelling of Sheelagh, as a nod to her mother’s Irish heritage.

She was the youngest daughter of Harry Leslie Churton and Elizabeth Mary Stephens Drapes. And she was so proud of her parents: Leslie was a Cestrian with deep roots here [Chester, England], son and brother of two mayors of Chester. He was an electrical engineer and met Elsie when he was sent to work in Ireland at the Asylum in Enniscorthy. In World War I he served in the Cheshire Regiment and lost an arm in battle. He adapted by taking a degree in law and joined the family firm of W. H. Churton and Sons.

In the days before dyxlexia was understood, Sheelagh suffered through her early school years and had sad memories of being shamed, forced to wear a dunce cap and ridiculed. She worked extra hard to compensate for her dyxlexia and took a domestic science degree. 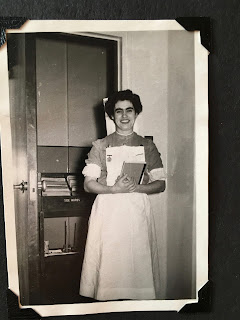 But since the age of four she had always wanted to nurse, so she pursued her SRN at the QE Hospital. She took her first part midwifery at the City Hospital, Chester, and her second part in the slums of Birmingham, delivering 99 babies without losing a-one! Just as they do on Call the Midwife she rode her bike everywhere, but she said the show is a highly sanitized version of conditions at the time. She donated many a cardigan to families that had not even a rag in which to wrap their babies.

By 1950 she was appointed Ward Sister of the Medical Professional Unit at the Queen Elizabeth Hospital, and at 25 was one of the youngest ward sisters ever to be appointed.

Sheelagh never married, but that was not for want of proposals! She was tops in her field, and the demands of her profession precluded marriage. Eventually she decided marriage would have limited her ability to help so many people, and she was happy with her single life.

In 1960 she was sent to the US and Canada to gain experience in the care of patients undergoing open heart surgery. 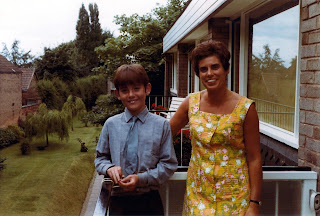 Also in 1960, her nephew, Myles, was born in Africa. At eight he was sent to school in England while his parents remained in Kenya, surely a jarring experience for any child. It was then that Auntie Tealy became his surrogate mother. She came to see him on his sports days, brought him home for school holidays, nursed him when he had a relapses of tropical illnesses, and drove him to the airport, reassuring him that at 8 years old he could make that flight to Africa on his own!

In 1967, Glaxo Pharmaceuticals awarded her a scholarship to study nursing in the Far East, at one point even working with lepers. In Australia she served with the Flying Doctors Service. She had a great urge to travel, and felt privileged to have visited so many countries.

Before retiring, she worked in a hospice in Sheffield, studying the effect on children of a death in the family.

Once retired, she greatly increased her volunteer work, including
She had many interests, one of which was shell collecting, chiefly from the coral reef in North Africa and the southwest coast of America.

She was an avid travel photographer and her sensitive shots reveal the deep empathy she felt for all of humanity. 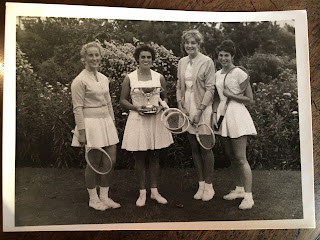 She was a keen sportswoman! In Birmingham she belonged to a hockey and tennis team and studied dance. Skiing, water-skiing, swimming and walking were also activities she enjoyed. She was in great shape her whole life, and at 90 could spring up from a low sofa better than most 40-year olds!

In her "auto-obituary," Sheelagh wrote: “Sheelagh attended the births of her three grand-nephews in America, supplying love, support and stamina to the family. She visited every year and enjoyed watching them grow up.”

What an understatement! What Sheelagh couldn’t describe was how much she was loved by those around her, especially our little family. I know each one of you has a story about her: how she came to care for a shut-in, to give the caregiver several days of relief—sometimes difficult patients, with the violent type of Alzheimers, sometimes, heartbreakingly, her own friends who were ill. Or children. And, as in my case, new mothers. She came to us as an aunt but transformed into a nurse when we really needed her. She was a phenomenal help, taking babies to change and “wind” them just when we were on the verge of collapse. She once pulled an all-nighter the day she arrived from England!

Of course our boys adored Aunty Tealy. She played endless imaginative games with them and spurred them on to be sensitive and creative fellows. I will always be grateful to her for the gentle love and nurturing she brought to us and to everyone with whom she came in contact. 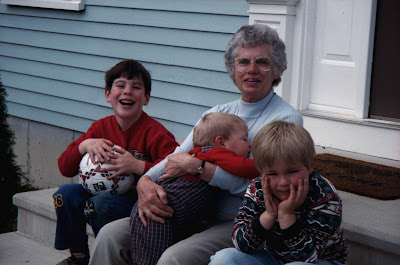 Aunty Tealy, your favorite saying was “A place for everything and everything in its place.” Surely, there is a shining place for you in heaven today.
Posted by Polly F. Kimmitt at 6:15 PM

Oh, Polly, she sounds so lovely. I'm sorry I never had the chance to know her. I know you will miss her deeply, but how blessed you were to have had her in your life.