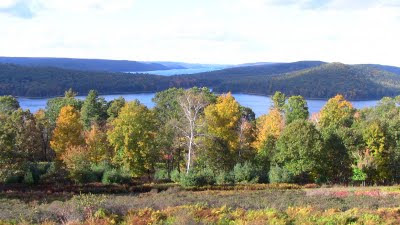 Capt. Levi spent most of his time living in towns that no longer exist. They have been decommissioned, the land taken in order to create Quabbin Reservoir in Central Massachusetts. It is the largest man-made body of water used exclusively for drinking water in the world, apparently. It was created in the 1930s in a massive, Big-Dig type engineering feat which razed four towns, dammed a few rivers and voila! drinking water for Metropolitan Boston forever. They took down every single building and tree in the area. They disinterred and then reinterred every body in every cemetery. It was quite a wild few years and there have been couple of interesting books written on the subject. There is even an ever-dwindling group of folks who lived in those towns that get together for coffee every month to reminisce.

Capt. Levi was born in Eastham, on Cape Cod in 1785. He moved to this area with his wife, Betsey, somewhere between 1811 and 1815. Betsey was his first wife, but not apparently his first love. A marriage intention was published for him and another woman in 1807. She married someone else a few months later, so I can only assume that Levi was ditched! Maybe he was at sea too much and she got bored.

Levi and Betsey married in Eastham in 1809. Soon thereafter, land records show a spurt of activity when Levi purchased land in Dana (Worcester County) and Enfield (Franklin County). By 1815 the good Captain and his not-so-good wife had moved to Dana. It seems an odd place for a sea captain to set up housekeeping. Very odd, and it set off warning bells when I first learned of his residence so far inland, especially since I knew he was still actively sailing. Was he perhaps worried about the War of 1812, trying to keep his family far from any potential danger? Or was he trying to get away from everyone he knew because he discovered his wife was a wild woman?

I had been searching for birth records for Levi and Betsey's children and found nothing, so I ended up writing a genealogy proof argument for the birth their son Franklin in Phase One of my report to the client. Levi was married again in 1822 to a lady named Palace, so I assumed that Betsey had passed away. I didn't find her death, but I didn't find much at all in Dana/Enfield at that time so I didn't think much of it.

Divorce was very rare in the early 18th century, so I was thrilled to find out that Betsey hadn't died, they had been divorced! Anyone who reads my Facebook page will remember the scandalous behavior of Levi's wife that I posted about a month ago. In 1815-1816, poor Levi was at sea for eleven months on a "voige." Six months after he returned from the coast of Africa, Betsey was "taken to bed with a son." Levi gets various people to testify as to her dastardly behavior (and with young children in the house). Betsey failed to show up for court appearances and in 1820 they were divorced.

Here is a little transcription of some of what Betsey was up to. The most alarming page is in terrible condition and I can't read it, especially at the critical point, but I'll show you what I could pick out.

that he has faithfully performed towards the said Betsey, all the

duties on his part, by the marriage covenant enjoined. And said

Libellant further avers that the said Betsey, regardless of the

duties on her part by the marriage covenant enjoined, did,

on the first day of February one thousand eight hundred and

sixteen, at a place called Dana, in said County of Worcester

and at divers other times as well before as since, at said Dana

with one Chandler Wood and divers other persons to said Li=

=bellant unknown, commit the crime of Adultery. Where=


I Samuel Pike of Petersham County of

Worcester and commonwealth of Massachusetts

being of lawful age do testify and declare that

according to the best of my recolection Capt.

said did come home from the cost of africa

about the eleventh of April in eighteen hundred

and sixteen and was gone on his voige about

eleven month and in about six month

and twenty-three days from the time that Capt.

XXXs wife was brought to bed with A

son. And sum time in the month of April

Chandler Wood of Petersham came into my

[name?] and told me that if I would go with

him to his house that he would sho me

A curiosity and I went with him and on

the way to the barn Wood told me to go in

to the barn which was in plain sight of

Capt. XXX’s house and [^it] was about at noon

day and Wood told me that in A few minuits

I should see A white cloth come out of

Capt. XXX’s house and be hung up or swoung

about in sight of the barn that I was in and

Wood went to the out side of the barn in

sight of XXXs house and in about fifteen

minuits, I saw A white cloth come out

of XXXs house and was flourished about back and

forth in front of the barn that I was in for

A number of minutes...


I Joseph Giddings of Dana in the County of Worcester

of Lawful age [illegible, possibly “do testify” or “do declare?”]

and say that according to the

left home in Dana where his wife was there Living and

informed me of her situation that is that she was

then in a state of pregnancy by one Chandler Wood of

which was a common opinion she wished

me not to divulge the same which I [supposed? promised?] by a

to procure a abortion of her state of corruption [s]

he was delivered of son which I should say was full

Wow! OK, I know Levi was away a lot, but you know that's going to happen when you grow up in Eastham amongst sea captains and fishermen. Betsey was baaaaaaaaaaad! I'd like to search the court records for who got the children, etc., but alas, time...

In 1824 Levi married another Eastham woman, Lydia. They went on to have at least five children, the youngest of whom was born in 1837 when Levi's children by Betsey were already having children of their own, and Levi was 52. Levi and Lydia lived together in Enfield until Lydia died in 1857. Levi stayed on in his home, sharing it at the end of his life with a man named Collis, who apparently looked after him in his old age. Levi died in 1864.

When the area needed for Quabbin was razed, some houses were just destroyed, but others were dismantled and rebuilt. Capt. Levi's house actually dates from 1767, pre-Revolution, and it was moved to Amherst, where my son is now attending college! I haven't had a chance to photograph it myself yet, but here are two photos from the web, one while it was still in Enfield (they went around and photographed the towns extensively before razing) and one as it stands now.

I hope to be able to tour it someday! 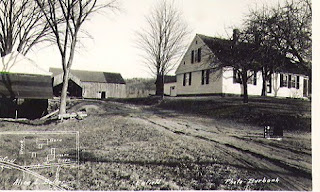 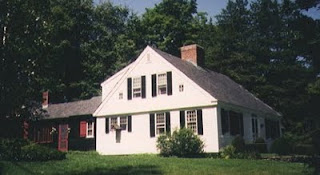 Tsk tsk, Betsey! But she makes for a fun ancestor, doesn't she?