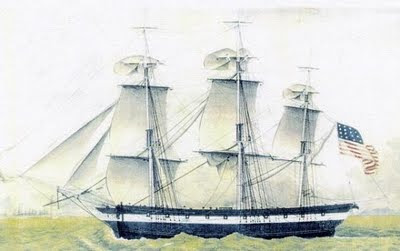 Ship built in Salem 1792, with a sparred length of 171 feet, carrying 342 tons. Courtesy of the Peabody Essex Museum

Client research has led me into the world of early nineteenth century Maritime Massachusetts and it has been a lot of fun getting familiar with it. I won't mention Capt. Levi's last name because it is being done for a client and until I present him with the info, I don't think I should publish my findings as such. But it doesn't matter anyway.

The client originally contacted me saying he had a painting in his possession that shows a ship at sea. On the back it was labelled "Brig William Gray, [the captain's name], Palermo, Sicily 1824. He wanted to know how this happened to descend to him. He knew only of a great grandmother Jennie, with the same maiden surname, but had no information on her at all. My task was to see if she was related to the captain. That was phase one. I discovered that she was the granddaughter of the captain. Her father's birth was not registered where it should have been, so I prepared a very detailed genealogical proof argument using a ton of indirect evidence. I spent most of the report talking about Jennie's father because he migrated somewhat frenetically and changed his occupation, too, making it difficult to track him. The client enjoyed my narrative report (I used it in my certification portfolio) and requested phase two, more detail on the captain. 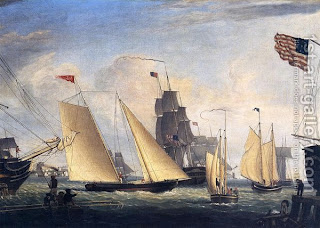 This a poster available for sale at 1st-artgallery.com.

Capt. Levi was born in Eastham, on Cape Cod, in Massachusetts, in 1785. His roots extend back to Mayflower and early Plymouth Colony folks. He is easily eligible to join both Mayflower Society and SAR if he chooses. The information about his earliest immigrant ancestor places him in Scituate for a while, so I'm probably his distant cousin. I find this amusing.

Levi was a master mariner and it looks to me like his father was as well. One or both are listed many times in newspaper notices of voyages to Europe, South America, the Carribbean and the Eastern seaboard from about 1793 1o 1828. His father passed away in 1811 when Levi would have been 26 years old, perfect age to take on the job of master mariner. I imagine he had been sailing with his father all during his teenage years, but cannot find any proof of that.

This is not a period of abundant records, especially for those sailing out of the port of Boston.  The country was young and agencies to regulate commerce were just getting established. The Custom House, which created and housed what records did exist, burned in the 1890s and they were lost. I looked for something similar to Lloyd's Register, but there is nothing that early for US maritime activity. There are records out there, but to find them would greatly exceed the amount of hours we contracted for. Maybe it'll be a phase three... In addition to the paucity of records, life on the high seas was wild and woolly with multiple dangers from impressment to piracy and war. With embargos and capitalism gone wild, people made up their own rules. And rule-breakers don't like to keep records.

In an undated article in American Heritage Magazine, "Portrait of a Yankee Skipper," which I found at http://www.americanheritage.com, Archibald MacLeish tells about the life of his great grandfather, Capt. Moses Hilliard. He is lucky enough to have inherited a boatload haha of documentation from him. Capt. Hilliard was a "buyer and seller of goods of all kinds, from castor oil and cowitch through rum, coffee, and cotton to garden seeds of curious kinds and the best stockings and shawls to be purchased on the Paris market; he was a dealer in foreign exchange in a number of currencies, including, together with the Russian and the usual European varieties, the complicated coinages of the Spanish Main ...He was a sea lawyer skilled in the filling out of bills of lading in quadruplicate, one to he sworn to before consul or judge affirming United States ownership and three to be sent home, each one in a different vessel; he was a student of long-range and short-range markets in a number of Atlantic ports, a close observer of world affairs (particularly wars), a diplomat of sorts (especially at his own table), a master-rigger, a bit of a doctor, his own laborious secretary, a pleasant companion to his passengers, and a good bit of a man of the world wherever the world might be—in Demerara or New York or Paris.

According to the newspaper notices, father and/or son travelled up to 1812 or so to the following ports: Havre de Grace, France; Jamaica; Les Caves, Haiti; St. Thomas; Lisbon, Portugal; Cadiz, Spain; Montevideo, [Uruguay]; and Laguira [Venezuela]. Later voyages seemed to stick to the Eastern seaboard and included such ports as Savannah, Baltimore, New Orleans, Philadelphia, New York, Richmond and Mobile. They sailed in romantic sounding ships called schooners and brigs. The newspapers kept careful track of how many days it took them to make a trip and there was a lot of competition to make a trip as quickly as possible. This, of course, only added to the other dangers.


There's so much to learn about Levi that I could just study him and his trips for years! I have gotten really, really bogged down with this research because I'm a bad business person and have don't want to stop investigating. It's just too much fun. I did stop, however, a few months ago (!) and am now compiling. I'll write more about Levi in future posts.

Very sorry about the formatting on this. I tried to just paste the photos in instead of importing them and it messes it all up.