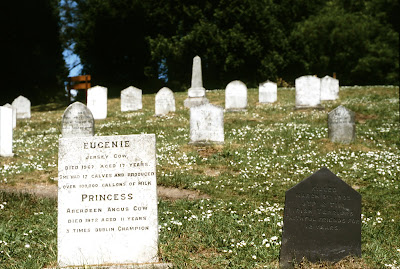 Browsing around in my husband's photos folder tonight, I came across this photo. We took it in June of 1989 when we were newlyweds touring across Ireland. We were at Powerscourt Estate near Enniskerry, County Wicklow, Ireland. It is an absolutely stunning estate, dating back to the 13th century, and though they had had a fire a few years before we visited, it was still lovely in its opulence. This whole cemetery was for pets. I remember being annoyed at the time that animals would have an entire cemetery to themselves while my own ancestors were lost in a maze of unmarked graves covered by brambles. 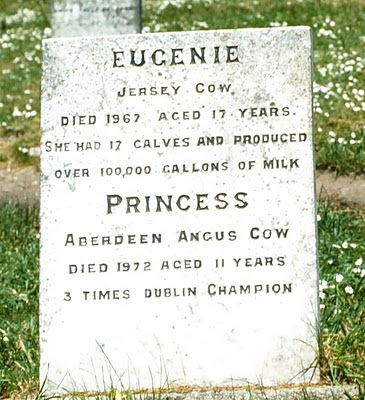 EUGENIE
Jersey Cow
Died 1967 aged 17 years
She had 17 calves and produced
over 100,000 gallons of milk
PRINCESS
Aberdeen Angus Cow
Died 1972 aged 11 years
3 times Dublin Champion
I browsed the web a bit and found this more recent photo which shows just how much moss and dirt it has gathered in the 21 years since we photographed it. 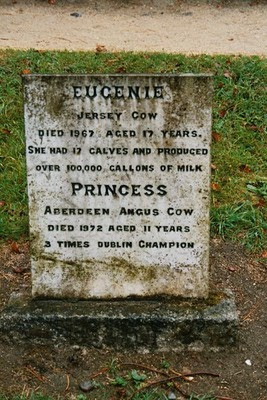 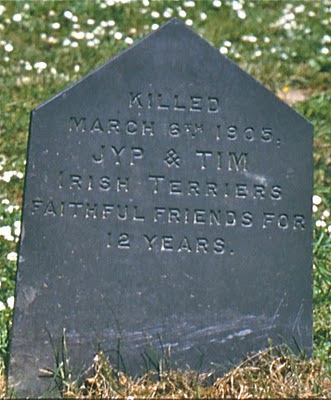 Killed
March 16th 1905.
JYP & TIM
Irish Terriers
Faithful friends for
12 years.
Yup, I know it's a class thing, but it still rankles to have my "bog Irish" great-grandparents lying in some unknown spot whilst Jyp & Tim get the timeless memorial.

I visited the pet cemetery here in Londonderry and blubbered like a baby over the inscriptions. I never blubbered like that in a "real cemetery" and it really bothered me. What was going on?

I think it goes above and beyond what you'd expect, especially long ago, and for that reason alone, it is moving to think that people cared that much for their animals. It's not like the beasts left instructions in their wills, or wanted to be remembered for posterity. It's just a truly affectionate and sentimental response to a loss. 'Tis sad but sweet.

Any idea how far back the animal graves go? The oldest one you have posted here is 1905. Just curious.

Don't know, Marian. I did a quick browse around the web and the only mention I found was one blog entry that estimated some stones at over 100 years old. Perhaps I photographed the oldest one? Too long ago to remember!