I don't choose my friends by how many historical documents with genealogical value they own. I just got lucky. Occasionally my pal Harry brings along a treasure for me to admire. It makes me feel like I did as a kid when my father would bring home a little trinket. Only what Harry has is immensely valuable to historians and genealogists alike.

A couple of weeks ago he appeared bearing a mylar pocket with a small yellowed letter in it. I only had to read a few words before I knew I'd need to transcribe the entire ten pages. The words of a man about my age, born a little more than 200 years before me, all about his life and family. He wrote it about a month before he was discharged from his position as a minister in the town of Douglas, Massachusetts.

I snapped photos of it on my kitchen table with my iPhone, at night, so the images aren't great. I can always go back and recapture them, but I want to share some of it with you here before I bust a gusset. It will have to be in installments, though, because it is so long. I have Harry's permission to publish this. 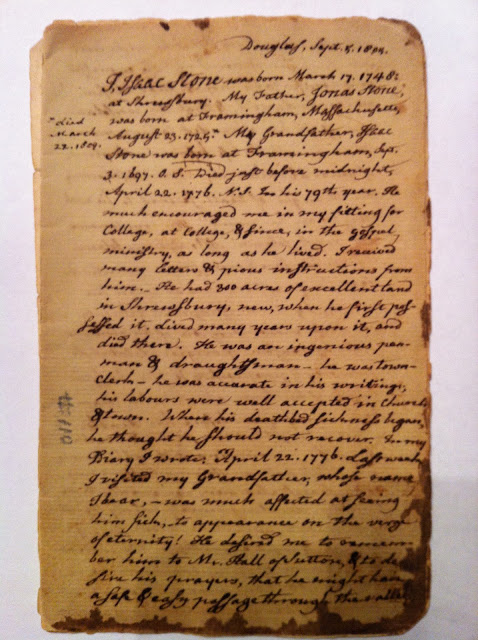 I, Isaac Stone was born March 17. 1748:
at Shrewsbury. My Father, Jonas Stone,
was born at Framingham, Massachusetts,
August 23, 1725* My Grandfather, Isaac
[footnote in right margin reads *died March 27. 1809]
Stone was born at Framingham, Sept.
3. 1697. O. S. Died just before midnight,
April 22. 1776. N. S. In his 79th year. He
much encouraged me in my fitting for
College, at College, + since, in the gospel
ministry, as long as he lived. I received
many letters +; pious instructions from
him. He had 300 acres of excellent land
in Shrewsbury, new, when he first pos-
sessed it. Lived many years upon it, and
died there. He was an ingenious pen-
man and draughtsman_ he was town-
clerk _ he was accurate in his writings;
his labours were well accepted in church
+ town. When his deathbed sickness began,
he thought he should not recover. In my
Diary I wrote: "April 22. 1776. Last week
I visited my Grandfather, whose name
I bear, – was much affected at seeing
him sick, to appearance on the verge
of eternity! He desired me to remem-
ber him to Mr. Hall of Sutton, + to de
sire his prayers, that he might have
a safe + easy passage through the valley
p. 2
of the Shadow of Death, +that he might enter
into the haven of eternal rest... [much religious
verbiage follows].

The first thing that strikes me is that his spelling is virtually the same as that we use today. I've seen works by well educated men but there's always something that gives away the fact that spelling had not settled down into anything standard. This man was spelling words the way we spell them today, and it was 23 years before Noah Webster first published his Dictionary of the English Language in 1828. Of course that was when the difference in spelling between British and American English was really standardized, thus we find Stone spelling labours rather than labors.

H. U., as you may know, refers to Harvard University. And well yes, that's what Harvard did: it trained ministers and educated them extremely well. Still, I'm surprised by his consistency in spelling, the neatness of his writing, and his syntax. Can't help it. And I find it appropriate that he mentions his grandfather being "an ingenious penman and draughtsman" and notes that "he was accurate in his writings." The apple don't fall far from the tree!

I compared some of his date notations to the Vital Records of Shrewsbury, Massachusetts, to the end of the year 1849 (Worcester, Massachusetts: Franklin P. Rice, 1904). There, on p. 99, his birth appears as "Stone, Isaac, s. Jonas and Rachel, March 6, 1747-8." OK, pretty close. (We'll see later that he gives us his mother's maiden name as Rachel Rice). The History of Shrewsbury also gives his birth as March 6, 1748, corroborating the date in the published vital records. So I just wonder which date is correct. The dates for his father and grandfather's deaths agree in Isaac's letter and Shrewsbury VRs.

The first page was enough to draw me in, and I continued to transcribe through his description of his grandfather's religious convictions, which I will present in the next installment.

Continued in: Sensible of His Vileness: The Battle for Isaac Stone's Immortal Soul

Other posts in the series: Isaac Stone's Paternal Ancestry
"I Call to Mind My Parent Dear": Isaac Stone's Tribute to His Mother
"I Begun to Learn Latin Latter End of the Year 1763"

*I have been obliged to substitute a + for an ampersand because of the limitations of html. If I can figure out a way around this, I will fix it.http://pk-pollyblog.blogspot.com/2012/05/sensible-of-his-own-vileness-battle-for.html
Posted by Polly F. Kimmitt at 10:36 PM

Great find- We believewe found the remains of his grandson who was in service at Fishkill supply depot and hospital where he died of small pox
http://www.findagrave.com/cgi-bin/fg.cgi?page=cr&GRid=111900217&CRid=2465485&
We are trying to save this hallowed ground from development, Please visit The friends of the Fishkill Supply depot to see how you can help.