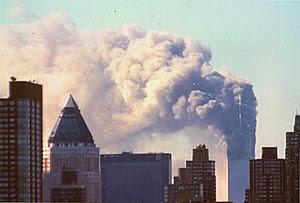 Some details of that horrific day are starting to fade, so before I forget, a brief note for my descendants...

Myles and I had been married 13 years on September 10, 2001. We chose to go into Boston for a romantic dinner and overnight stay in a hotel. I think it was Mrs. Potter who babysat our sons who were 10, 8 and 4. So on the morning of September 11th, we weren't even home. We were enjoying a fine breakfast in bed on the tenth floor of a Back Bay hotel admiring the beauty of a cloudless September view of Boston. You could see all the way to Logan airport and we watched the planes coming and going, wondering how they managed not to collide. We turned on the TV and towards the end of the Today Show, Katie Couric and Matt Lauer (I think!) brought us the news of a plane striking the World Trade Center. Not many days before that, a small plane had crashed into a building in NYC, so no one was particularly alarmed, and certainly no one seriously thought "terrorist attack." They may have mentioned terrorism, but the media is always trying to jack us up emotionally, and we were used to dismissing their excited chatter as the usual hype.

It was when the second plane hit that it sunk in. From that point on, we were riveted to the TV, occasionally switching channels to make sure Katie and Matt weren't hallucinating. Information was coming in from so many sources that no one had time to vett it and certainly couldn't make any sense out of it. They announced that air traffic was being halted all across the country. Glancing out the windows again we found the view of Boston was now eerily still. A city frozen in fear. I started feeling a bit vulnerable up there on the tenth floor, and wanted to leave, but Myles wanted to watch events unfold, and swept aside my anxiety with a dismissive, "Oh, relax!" News of a third hijacked plane came in. Accounts varied as to where it might be headed. the White House, the Pentagon, the Capitol?

It wasn't until the first tower collapsed that we looked at each other and started moving. We got a call from the desk telling us the hotel was being evacuated and we should check out right away. We hustled downstairs but instead of checking us out they just waved us away, barking out, "Just go! Go!" There were lots of people standing on the street, and police everywhere. Later we found out that the hotel was evacuated because they had already traced some terrorist suspects to the 9th floor, just one floor beneath us.

We had come in separate cars and I was really freaked out driving home alone in heavy traffic on the Mass. Turnpike. I called Myles and we stayed on the phone during the ride, silent, listening to radio accounts. All I could think of was that my little quiet town of Shrewsbury would never be a target for this sort of attack. I wanted to be near my children. Even if they were only in school, I needed that proximity so that if I had to I could even walk over to get them. It was listening to the radio in the car that really made me very afraid. They were following the course of the plane over Pennsylvania and trying to predict where it was headed. It just felt at that moment like someone was targeting everything we Americans look to for authority and protection. How many planes had been hijacked? Five, ten, fifty? Which news accounts were true, and which were panic? I already felt the psychological damage this would have on our country.

The stark irony of that gorgeous blue sky portending such danger was impossible to reconcile. We watched TV all day. They recommended that we prepare children, yet keep them away from the broadcasts. We greeted them as they got off the bus and tried to brace them for turmoil. Then for days and days Americans watched as the full horror unfolded. More and more accounts came in. The Pentagon, the plane in PA, all of the people lost in NY, makeshift memorials, relatives and friends pleading for information. And so many tears. We were totally vulnerable and bewildered. The whole nation was depressed, lifted occasionally by stories of great heroism.

September 11th, 2001 marks a vast division in the psyche of the nation. Before that date, most people had heard about terrorist attacks but pretty much ignored them because they did not take place on American soil. Newscasters would report disasters overseas only by relating how many Americans were killed. We were an insular, self-absorbed country, trusting that our own goodness would keep us safe. But when you stop being vigilant about your actions, and not protecting yourself, you are likely to get hurt.

I've lived in several foreign countries. When I lived in Italy in the late 70s and early 80s, I found out what it is like to know that terrorist attacks may strike. You just go on living –– but if a terrorist does strike, it does not have the devastating effect of shock as 9/11 did on Americans. It had never actually occurred to most people that we could become victims. Coming back to live in America, I knew it was just a matter of time. Our borders seemed wide open compared to those of other countries. If you read the newspapers, you were aware that there were many groups who hated or blamed the United States and the Western world in general for just about anything they didn't like. Fundamentalism, poverty and ignorance had combined to create a steaming cauldron of rage. I wasn't shocked, just petrified.

A chasm separates the day of our 13th anniversary, September 10, 2012,  from September 11th. Like Adam and Eve gazing down at their own nakedness, we are now cognizant of both our own vulnerability and aware that we have some accountability. We moved forward with ideas on how best to protect ourselves that mark a political split as well. We are now a nation sharply divided, driven to extremes by the intense fear of that day. I just hope that one day our great nation came come together on those values that we share, which are many more than divide us, and work together to keep America safe.

I don't think any of us who were touched by 9/11 closely will forget its devastating impact. My husband was supposed to meet a friend for lunch at WTC that day. He walked 12 miles to get home that day. He was lucky that he was in mid-town that morning. The night before, I spoke to a casual friend who had decided that he would participate in a charity baseball event I was working on for the night of the 11th. He died high up in Tower One. Our community was hit as were many around us. While the skies were eeriely quiet, the train station parking lots were both places of great relief for those who came home that night and of great sorrow for those whose cars stood in silent testament of a father or mother or brother or sister or son or daughter who would never return home. I will never forget.

So many lives were immediately touched by the devastation. The thought of those cars is indeed tragic. I didn't know anyone personally that was killed or injured, but was always so moved by the stories of bravery or serendipity or sacrifice that people made. I'm glad your husband got out, Priscilla.

Thank you for this, Polly. It helps to share the very specific memories and to read your larger view of our predicament as Americans.

That morning, I was at work, on a locked unit meeting with someone who was in the throes of mania. Totally preoccupied with that, I came out into the corridor, and as I walked toward the nursing station, which looked out onto the common room, I saw people, staff and patients, gathering and watching a plane crash into a tall building. I realized it was actually happening! There was a shift from that little world that is an inpatient unit, to a feeling of being exposed on the East Coast of this continent, just a short distance north of NYC. Then it was crisis mode, because we needed to support people--one was screaming (delusionally) that he caused it. I just did what needed to be done, remaining calm and feeling shut down.

After awhile, I went back to my office and called Harry. That's when I felt overwhelmed, but comforted too, just hearing his voice. I felt so helpless, knowing we could not protect Nathan, also 10 years old, from something like this. Our human condition includes such profound vulnerability--- because we love our children, but we are so very limited!

I take comfort from the powerful love and care that we offer, and continue to offer each other, in the face of this tragedy.