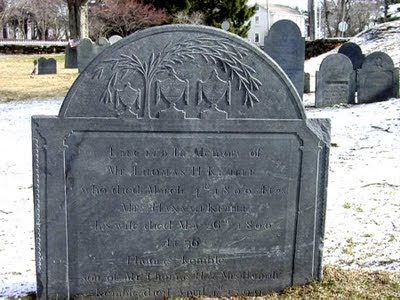 In honor of my genealogy blog brothers and sisters, I'll celebrate Tombstone Tuesday. Here's an image of the gravestone of Thomas H. Kemble, his wife Hannah (Pease) Kemble and their young son, Thomas. They are buried in Mt. View Cemetery, Shrewsbury, Massachusetts. All three died of consumption at the home of Hannah's father, Capt. Levi Pease, within the course of a year. Thomas H. and Hannah had one other child that we know of, Abigail, who only lived to be 21. She did not marry, and also died from consumption.

This is some lovely tombstone artwork, not primitive in design, and on a good-sized stone. The three urns represent the young family: two larger ones and a small one. In this time period, the first half of the 19th century, there was a heightened interest in and awareness of the ancient world. The United States was a new republic, and references to ancient Greece and Rome were plentiful. The urn represents the soul. The willow, sorrow.

I am going to portray Hannah Kemble in a Cemetery Tour next week. I get two or three minutes to talk about her life (and early death).
Posted by Polly F. Kimmitt at 5:09 PM

Remember to cough into the bloody handkerchief!

Do you know if there is an epitaph on the stone below the ground? The stone is sunk so much that it makes me curious.

I think there must be more under ground. I found a death notice in the newspaper shortly after he died with a poem by Milton, and I would bet that is on there.