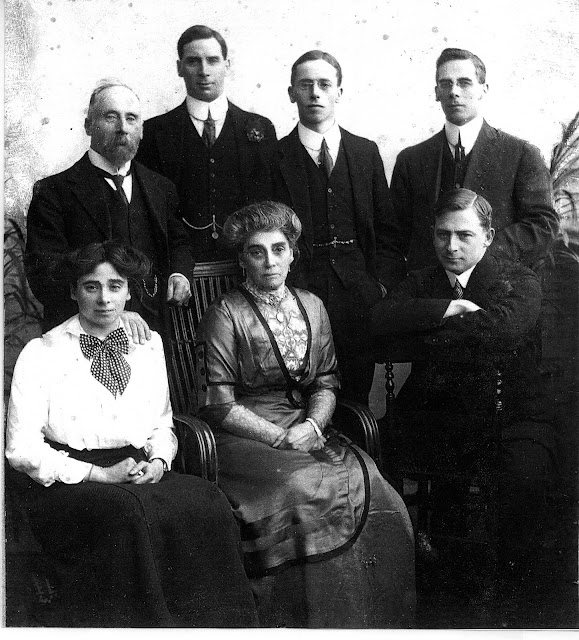 My husband, Myles, is English. Kind of. It's complicated. First of all, he was born in Kenya. His English parents were working for the British government in Kenya which was a British colony in 1960. So he is a British citizen. But there's another reason I say sort of. He's got lots of Irish blood in him!

This photo was given to me by Myles' Aunt Sheelagh, aka Aunty Tealy. Sheelagh is the daughter of the young woman on the left, Elsie Drapes. Elsie was Myles' grandmother. The elderly gentleman is Sheelagh's grandfather, Dr. Thomas Drapes. I hadn't done much research on this family, but I did know that Dr. Thomas was born 17 January 1847 in Lakeview, County Cavan, Ireland. His father, also Dr. Thomas, died when young Thomas was only 5 months old "On the 17th instant [July], at Lakeview, in this county, Thomas Drapes, Esq., M.D., in the 32nd year of his age, of malignant typhus fever, contracted in his attendance of the Fever Hospital in his district." [http:// www.irelandoldnews.com/Cavan/1847/AUG.html : accessed 4 March 2007].

Aunty Tealy was visiting us from England recently and after asking me all about my genealogy work, told me that at 84 years old, she is suddenly aware of how very little she knows about her own ancestors. So we did some googling and found a beautiful obituary for her grandfather Thomas. He was a very distinguished psychologist and the Resident Medical Superintendent at the District Asylum in Enniscorthy, County Wexford, for years. He published many articles in which it is evident that he was intelligent and thoughtful.

"In the Journal of Mental Science in October 1894 Thomas Drapes, Resident Medical Superintendent of the District Asylum, Enniscorthy, delivered a paper ‘On the Alleged Increase of Insanity in Ireland’. Ireland, he pointed out, ‘possesses the unique and unenviable distinction of a continuously increasing amount of insanity with a continuously decreasing population’ and he then went on to a thoroughgoing analysis of what statistics were available to him and to comparisons between the Irish and English scenes. ...In summary, Drapes claimed: ‘The net result, then, of this examination is to show that, while there is an undoubted increase in occurring insanity, as indicated by the records of first admissions, by far the larger part of the apparent increase in insanity generally is due to accumulation, and that the seeming preponderance of insanity in Ireland, as compared to England, is fictitious, and depends entirely on the greater amount of accumulation in Ireland, occasioned by the lower death-rate in that country, and (possibly) the lower rate of discharge of the unrecovered." [MENTAL ILLNESS IS IRELAND 1750-1922 , http://www.hrb.ie/storage/publications/hrbpublications/mentalhealth/Mental%20Illness%20in%20Ireland.pdf : accessed 10 May 2009].

Thomas and Lizzie moved to a lovely house, "Milleen", on a bluff overlooking the Irish Sea in Dalkey shortly before Thomas died in 1919. Dalkey was in County Dublin, just south of Dublin. Lizzie remained there for the rest of her life, living comfortably with plenty of servants to help her out. Aunty Tealy has fond memories of spending summers with her Granny there. She and Rosemary, Myles' mother, would travel with their mother via ferry from Holyhead in North Wales from their home in Chester, England. For the rest of her life, Rosemary would get a charge out of passing the Kish Light in Dublin Bay, a signal that they were close to Dun Laoghaire harbor and their beloved Granny. Tealy remembers that they used to be met by a horse and "cab" at the boat – there were no taxis at that time. The driver was named Cavanaugh and "had weepy eyes". He couldn't get up the hill and had to have someone help him, every time! They all traveled with trunks, and knowing my mother-in-law in later years, I would imagine those trunks were both numerous and very heavy! Tealy used to pity the poor horse, who constantly had his head in a sack, so she would steal biscuits to give him strength: pretty ones with pink and white marshmallow topping. Maybe she should have given something to Cavanaugh, too!

On the veranda at Milleen, Grandfather had left a very powerful telescope through which the girls would gaze across the harbor and see "right over to Hove and the whole of the Irish Sea." They liked to look at people on the boats coming in and imagine their itineraries. They kept themselves busy running up and down the huge staircase that led to Milleen, hiding in cupboards looking for sweets and giggling until Granny would exclaim that she could hear mice. They chased chickens in the "yard," and generally rattled around, bringing life to the huge home. Granny would send the girls out to the town common behind the house with a shopping list. They'd pick flowers on the way back and learned the fine art of floral arrangement from a patient Lizzie. Tealy even remembers doing an arrangement inside a matchbox once.

Lizzie died in 1944, just after she received a call about her son Bertie dying after lingering from a stroke for seven years. Sheelagh remembers, "She got the call, had her boiled egg and said, 'Now I can die.'" And she did. I would love to have met Lizzie. My mother-in-law, Rosemary, and Aunty Tealy were/are delightful ladies, and I just know that the love and nurturing they got from Lizzie gave them a sense of security and joy that is evident today.

Pictured above are Thomas and Lizzie with their four remaining sons and Myles' grandmother, Elizabeth Mary Stephens "Elsie" (Drapes) Churton. Elsie was the youngest of the living children. I'm not sure right now which brother is which, but they are: Dr. Thomas Lambert "Bertie" (1878-1943) - this is their eldest, and one that died right before Lizzie; Alexander Plunket Preston "Alec" (1879-1901) who participated in the Alaskan gold rush and settled in Montana; George Russell (1880-1935) of whom we know very little except that he perhaps married a "dreadful woman"; and Francis Colley (1883-?) who worked on the stock exchange and also had an "awful woman" for a wife. Note to self: must clarify this!

When she was about 18, or ca 1903, Elsie met English engineer Harry Leslie Churton, when he was installing the electrical system at the Asylum. He is the only one of Myles' four grandparents who was English. This means that though my maiden name is FitzGerald, I actually have more English blood than my "English" husband.
Posted by Polly F. Kimmitt at 9:20 AM

Just getting caught up and glad to see a fellow knitter also interested in fmaily history. Welcome to the blogosphere, Polly! I look forward to hearing how you balance it all!

Stumbled on your web blog which is fascinating reading. Looks like we are connected.
Regards Mark Drapes
mark.drapes@freenet.de

Hi Polly
not sure if the first comment worked.
Beautifull bit of research, looks like we are related.

Hi Mark! Thanks for making contact. If you want to email me at familyhistorian at mac.com we can exchange some information!

Hi Polly, I was perusing some old family photo albums and came across pictures of the Drapes family in Enniscorthy in the early 1900s, including ones of Elsie, and the asylum in Enniscorthy. I googled some names and came across your blog - thanks for filling out these pictures for me. I am unsure if they are relations or family friends. I am happy to share these photos if they would be of interest to anyone.
Hilary

Hi Hilary! That is so neat! I would adore seeing those photos! I wonder if you are related! If you want to send me an email at familyhistorian at mac.com, that would be wondrous, indeed! Thanks again!