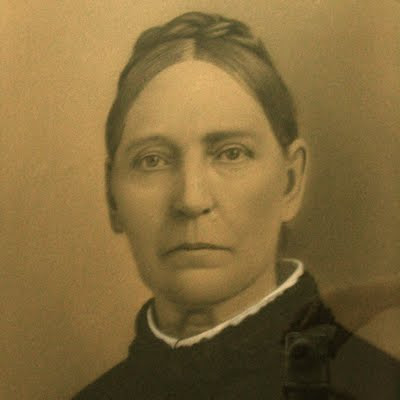 Here is your assignment if you choose to play along:
1) How old is your father now, or how old would he be if he had lived? Divide this number by 4 and round the number off to a whole number. This is your “roulette number.”
2) Use your pedigree charts or your family tree genealogy software program to find the person with that number in your ahnentafel. Who is that person?
3) Tell us three facts about that person with the “roulette number.”
4) Write about it in a blog post on your own blog, in a Facebook note or comment, or as a comment on this blog post.
5) If you do not have a person’s name for your “roulette number” then spin the wheel again – pick your mother, or yourself, a favorite aunt or cousin, or even your children!

Here is mine, a day late, hopefully not a dollar short:

# 25 in my Ahnentafel is Olive (Litchfield) Barnes, 31 Dec 1820 to 22 August 1886. She's my gg grandmother. Olive is one of my favorite ancestors, mainly because the above image of her hung on my Aunt Louise's and then my brother Jed's wall all through my childhood. Poor Olive was the subject of great mocking by children because of her dour expression. I bet she was about the age I am now, 54, when this portrait was done.

1. Of of her four grandparents, three were Litchfields.

2. Olive's paternal grandfather, Capt. Daniel Litchfield [Sr.] built a house in Scituate which my brother bought in the 1970s. When Aunt Louise gave Jed and his wife Regina the portrait of Olive it was as if she had come back home.

3.  She died of a cerebral embolism.

The most striking element of Olive's life concerns the children she bore and lost. She and her husband, Israel Merritt I had only one child who survived to adulthood: Israel Merritt Barnes II. The Vital Records of Scituate, Massachusetts to 1850 showed the deaths of two little girls within eight days, both of them from tummy troubles: i.e. "dysentary" and "bowel complaint." My mother always said that IMB II spent away the family fortunes, and did so because he was a spoiled brat, born an incredibly long 17 years after their deaths. Plenty of time to long for, and then spoil a child.

In pursuit of certification, I looked into this family in more detail and was quite thrilled to uncover the birth of another baby, which took place between the deaths of the two girls and birth of IMB II. It started with an entry on Ancestry World Tree, a place I don't often visit for serious genealogical pursuit. However, I was really puzzled as to why someone from Scituate would have entered this birth and death, so I contacted the author. It turned out her mother was a friend of my Aunt Abbie, grew up in Scituate, and probably got the information, whether directly or indirectly, from an elderly genealogist friend of the family, who may have actually remembered the event! I knew her mother's name very well: Polly. I'd heard it growing up but don't think I ever actually met her. I can count on one hand the number of Pollys I've met. I couldn't ignore that posting, so I persisted and eventually pinned down a newpaper notice that confirmed the birth and death of a baby Webster in 1855, 11 years after the girls died, 6 years before IMB II was born. Following that, I found conclusive evidence in church records in the Scituate Archives.

It's always hard finding information on women. The poor things were restricted in what they could do, so they didn't leave anywhere near as many records. However, the joys and pains of childbirth are something I can relate to, and though I used to mock poor Olive in my youth (see below), I have a great amount of respect for her now that I've grown up. 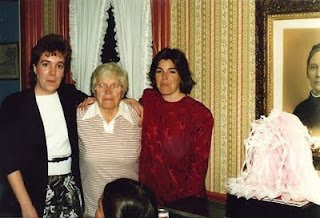 Oh my, that "dour Olive face" picture is priceless!