Back to the Old Home --Genealogical Research in Dublin

This is the first in a series of posts about a research trip to Dublin.
1. "Back to the Old Home--Genealogical Research in Dublin"
2. "Digging for the Truth at the National Archives of Ireland"
3. "How Many Repositories Can I Visit in One Day?"
4. "Irish Land Records Not Just About Land!"
5. "Wronged Again"
6.  "He Endeavored to Lay Claim to This Land But Was Prevented"

Research Problem: My most obscure lines start with my father's parents, Patrick FitzGerald and Annie O'Sullivan from County Kerry. They emigrated separately about 1890 from neighboring townlands, met, then married in Boston in 1896. Patrick's father, grandfather and great-grandfather were all named John. The name is so common that is it really hard to conclusively identify one John FitzGerald from the next. The snippet above is from a Boston Globe article quoting my grandfather telling how the family was evicted in 1883 from a 75-acre farm in the townland of Farnes, Kilgarrylander. Family lore says that Patrick's father died when he was very young, but he was alive when evicted, so Patrick was at least 16. Patrick's mother Mary (Hurly) FitzGerald is in the 1901 and 1911 census, and her burial in 1919 can be found on the Keel Parish burial records online. The names FitzGerald and Sullivan are extremely common in County Kerry, making my job that much more difficult. In addition, John does not appear in the townland in the article above in Griffith's Valuation. 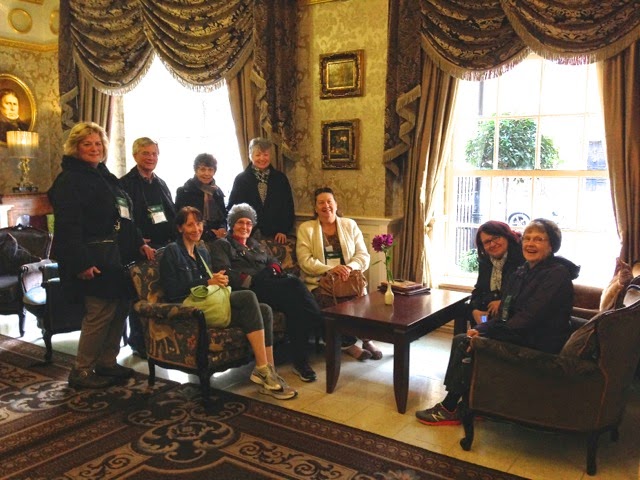 I've neglected my own Irish research for far too long so I signed up for a research tour with my esteemed colleague Donna Moughty, who hosts a tour every year and brings a group of wanna-be Irish genealogy researchers to Dublin and/or Belfast and enables them to hit the ground running. My reason for signing up: the worst part of visiting a new repository isn't necessarily what records they have, but rather figuring out what hours, identification, gear to bring, quirks of the staff, etc. By having Donna set up appointments, tours and introductions we were able to cram in a lot of research.

Before we left Donna asked us what we were working on, then sent back a detailed research plan. I already had my own research plan, of course, but really appreciated Donna's perspective because she knows more than I do about Irish records. There was nothing new in mine, but I liked that we were thinking along the same lines!

A week may seem like a long time to non-researchers, but with thousands of Irish ancestors to consider (between my husband's 3 grandparents and my 2, we start with 5 lines), and some darn stubborn problems on my Irish Catholic ones, it's hardly any time at all. Or "atahll," as the dear Irish would say.

We gathered on Sunday evening in our hotel, Buswell's. I had spent the weekend with an ailing aunt in England and was feeling very sad about that so it took me a while to put that aside and screw on my thinking cap. We had a nice dinner right in our hotel, Buswell's which is directly across from the National Library. Two of my good friends are also on the trip, so it was fun to see them and meet the other people. Brian Donovan and Fiona Fitzsimons from Eneclann came as guests and told us a little bit about the latest project of digitizing the Valuation Revision books. In color!

Bright and early Monday we headed across the street to the National Library of Ireland. First we got an orientation and tour, then IDs, so finally a little before noon we were released for research, chomping at the bit!

I first tried looking in some Kerry newspapers for an announcement of my grandmother Mary's death in 1919, but of the three newspapers I ordered, one microfilm couldn't be found; another listed incorrect dates in the catalog, so it wasn't available; and the third provided no article about Mary.

Next I consulted a book called Lambert of Wexford by Hubart Andrew Lambert, Esq. It starts with the Norman Conquest and explores some very early branches, none of which can I yet connect to in my husband's family. However, I took a photo of the title page and each page of the article because you JUST never know! 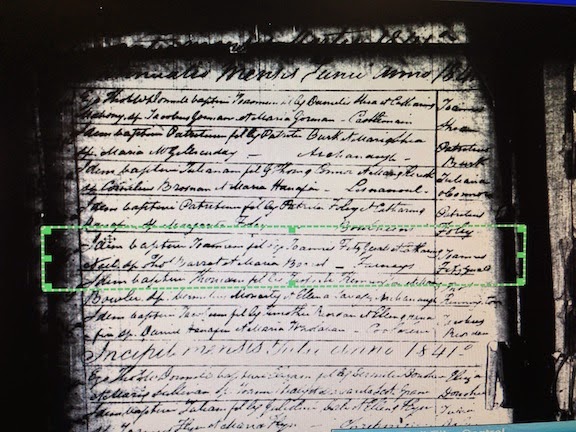 Finally, I hurried over to the baptismal records for my grandfather's parish, Keel and Kiltallagh (now called Castlemaine) in Co. Kerry. I had viewed the actual registers with my mother and sister in 1989, and carefully transcribed births and marriages for all direct line FitzGeralds and siblings, but since I was a baby genie back then I wanted to verify and get some images as well, especially since there is a conflict with my grandfather's father's name. His birth here shows him as son of John FitzGerald and Catherine Neil, but in his marriage to Mary Hurly it states that his father is Patrick. Gah! I also want to expand upon the larger family, but I ran out of time so will need to return.

All in all a rather frustrating day because I didn't get much done, and didn't get to the General Register Office as I had hoped. After a fine meal at Peploe, we came back to prepare for Tuesday's research.

See post about Tuesday and Wednesday.
Posted by Polly F. Kimmitt at 5:49 PM

Polly - You are in the same tour as a good friend of mine - Jacqi Stevens. I love reading about other genealogist's travels to visit different archives and respositories that are new to them. Here's wishing you good luck in finding the records you need!

Loving the posts from you and Jaqui! Thank you for sharing your ups and downs. Hope you start having more ups!

I've been following your trip through your Facebook posts and just now got to read through all of your blog entries about your trip. So glad you had the chance to do some research in Ireland on your family! I hope you get all of those John Fitzgeralds sorted out and find the answers that you are looking for. Good luck, Polly!

Thanks, guys! It was a whirlwind trip and I'm still digesting the results of my research. Next time I'll need a month!