Digging for the Truth at the National Archives of Ireland

This is the second in a series of posts about a research trip to Dublin.
1. "Back to the Old Home--Genealogical Research in Dublin"
2. "Digging for the Truth at the National Archives of Ireland"
3. "How Many Repositories Can I Visit in One Day?"
4. "Irish Land Records Not Just About Land!"
5. "Wronged Again"
6.  "He Endeavored to Lay Claim to This Land But Was Prevented"

I'm in Dublin, researching my FitzGerald grandfather's family and the loss of their 75-acre farm in 1883. An article in the Boston Daily Globe about Irishmen in Boston wanting to reclaim lost land after the Land Laws changed in 1903 gives some nice detail. The second page continues here.

I had already searched in the State Commissioner's Offices "Applications from Evicted Tenants, 1907," database on FindMyPast.com, to no avail. From what Patrick says above, it seems as though he had already started the wheels in motion by the end of 1903, so I needed to check the Evicted Tenants cases at the National Archives of Ireland (NAI) as well. But also, the last paragraph mentions that Patrick had made an appeal to the MP of West Kerry, Mr. Thomas O'Donnell, so I thought perhaps there might be some record of that still in existence. If it were, it would appear in the Registered Papers collection at the NAI.

Tuesday we came over to the National Archives. We had an orientation and got IDs, put our coats and items not allowed in the reading room in lockers and got started. I consulted with the archivist, Gregory O'Connor, who advised me on the use of their Registered Papers series. They come in the form of very large volumes in sets by year with an index and register for every year. The index is both subject and name-based, with different subjects then subdivided alphabetically. At Gregory's suggestion I began by looking under C for Constabulary, in 1883 and 1884, in case there had been any trouble with the eviction. I also looked under E for Eviction, F for FitzGerald and Farnes, K for Kerry and Kilgarrylander, and Rae/Ray, the landlord's name. I found nothing.

Next I moved on to 1903-1904 when the land laws changed and my grandfather appealed to O'Donnell. This time Gregory told me to look under the subject heading of Parliamentary Questions as well as the landlord. I looked also under E for Eviction, F for FitzGerald and Farnes, K for Kerry and Kilgarrylander, L for Land, and Rae/Ray, the landlord's name, and I added O'Donnell, against Gregory's advice, but I'm not going to take a chance at missing it! I found just a few references that seemed remotely possible so I had to request those files from the desk. They are filed offsite at the Four Courts so they would not be in until Wednesday.

(Gregory also advised me to check Hansard, an online database of parliamentary records (reporters, upon which the US system is based) but I'll save that for another time.

Knowing my grandfather was actively pursuing reinstatement of his land, I then explored the Evicted Tenants records. Using them is a three step process. You have to 1) order the index and registers (from Four Courts, so next day delivery); 2) consult those; then 3) order any appropriate files! So I ordered the Evicted Tenants Index and Registers. A great discussion ensued between NAI employees as to whether my request had enough information, but I was powerless and clueless so left it up to them to bash it out! I just hoped the index would appear.

I thought I'd do something straightforward, so I ordered the wills of my husband's great-grandparents since they were late enough not to have been burned in the Four Courts fire.

I still had nothing in hand for all of that research, but my notes were filled with references of things ordered, so when I left the NAI there was a feeling of great potential, but nothing more! I'm always struck by the contrast between instantaneous access on the web and archaically slow in real life. I have to say that I've been surprised by the number of times people have come back and told me a file or book or microfilm can't be found. I think perhaps they are lacking in resources and I fear that history is getting lost because of it. 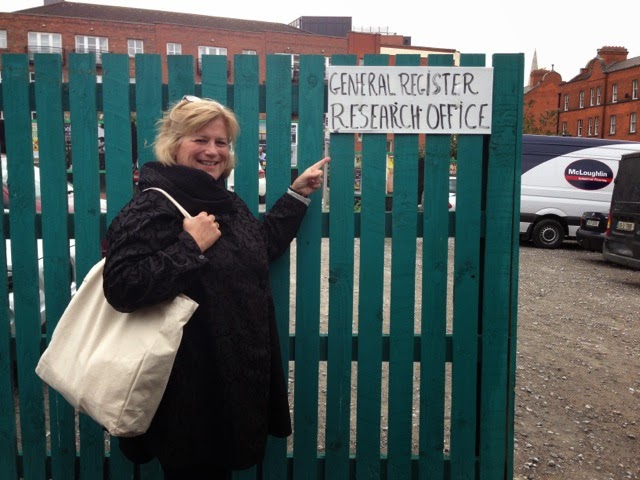 From the National Archives I went with my friend Patti to the General Register Office. On the outside it looks like a hideout from a street war, with barbed wire and camouflage material. On the inside they are highly efficient, so I requested and received the maximum 8 birth, marriage and death certificates, at only 4 euros each. They were delivered promptly in less than 15 minutes! I now have the death certificates of three of my four Irish great-grandparents, and a whole bunch of John Fitzgerald deaths that aren't my grandfather's father!

We dined out that evening with Donna, our trip host, and again went back to crash, I mean prepare for the next day's research!

Thanks so much for sharing some details about your research trip, Polly. This is a great introduction to research on site in Ireland for those of us that haven't yet made the trip.