Other posts in this series:
1. "Back to the Old Home--Genealogical Research in Dublin"
2. "Digging for the Truth at the National Archives of Ireland"
3. "How Many Repositories Can I Visit in One Day?"
4. "Irish Land Records Not Just About Land!"
5. "Wronged Again"
6.  "He Endeavored to Lay Claim to This Land But Was Prevented"

In my last post I told the story of searching for proof of my grandfather's eviction from the family farm in County Kerry, Ireland in 1883. Before I left Dublin last week I requested case number 13,324 from the Irish Land Commission's Estate Commissioners' Evicted Tenant's Files at the National Archives. And today it arrived! But first a little background.

As is usual in genealogical research, the deeper you dig, the more you find. One newspaper article leads to research in Evicted Tenants, and that leads to studying the laws that caused the records to be created in the first place. And that leads back to the article to read it more closely.

Over the course of the eighteenth century for a variety of causes (emigration, competition from US grain producers, a mini-famine, inequitable laws, and all kinds of financial kerfufflement) the cost of leasing land became prohibitively higher and many tenants were evicted. From the 1870s to 1890s Ireland experienced much political and legal activity around inequities in land ownership. The Irish National Land League was established to improve the lot of poor tenant farmers and attempted to bring about redistribution of the land from landlords (especially absentee ones) to those who had occupied the land for decades or longer.

In response, the UK government introduced a series of laws (Irish Land Acts) in the late nineteenth and early twentieth centuries designed to improve the lot of the tenant farmers. The law of 1903, the Wyndham Land Purchase Act, was what spurred my grandfather to action. In that act: a) sales agreements were to be agreeable to both parties; b) the land was to be offered at fair market value; and c) the government was to step in to pay the difference between the price offered and the actual value. This effectively ended landlordism in Ireland and by 1914 about 9 million acres had been bought up by tenants.

Here is what came in the mail today. 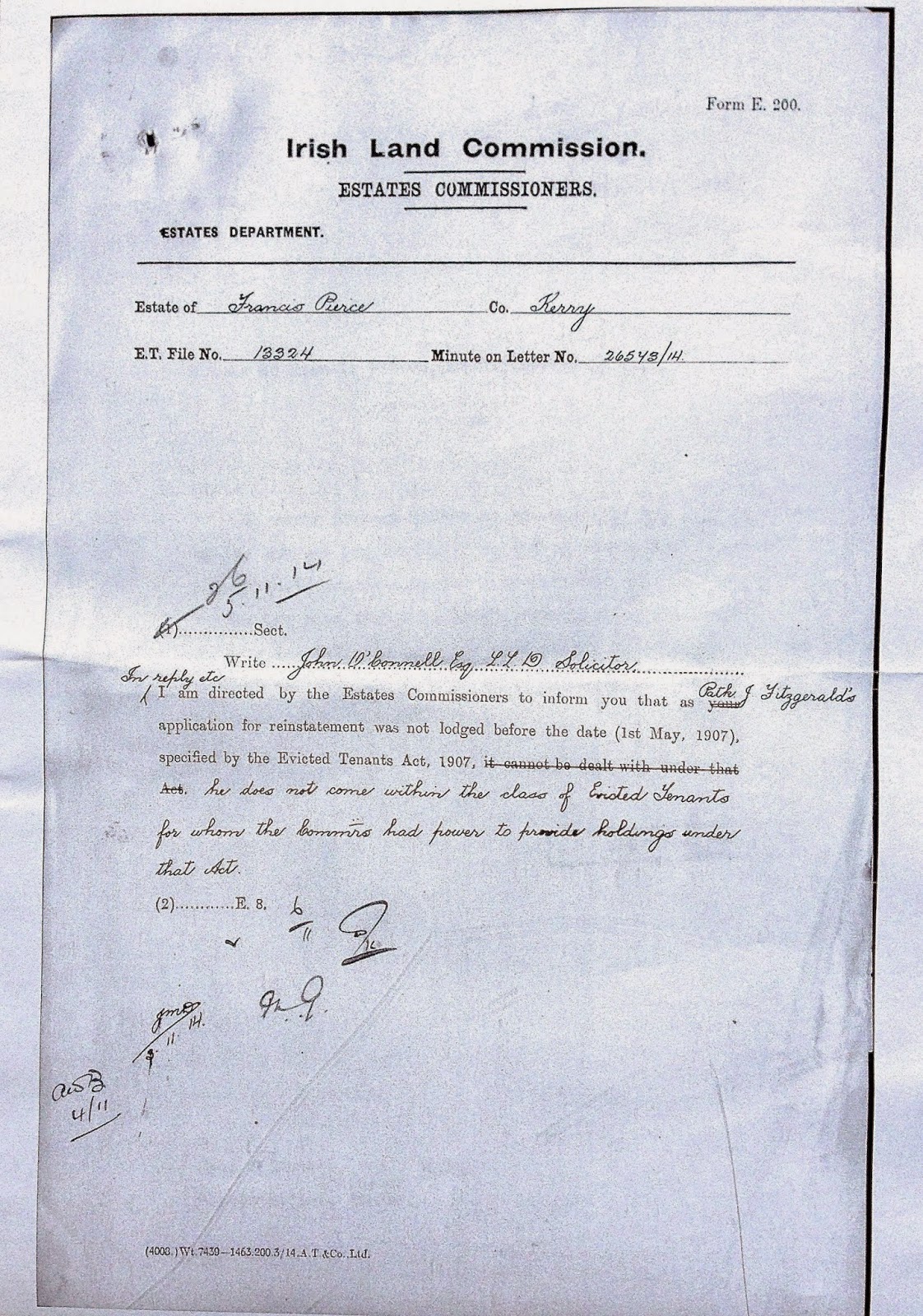 This letter and the next essentially state that he missed the May 1, 1907 deadline as specified by the Evicted Tenants Act of 1907. Given what is stated in the Globe article, that is odd. 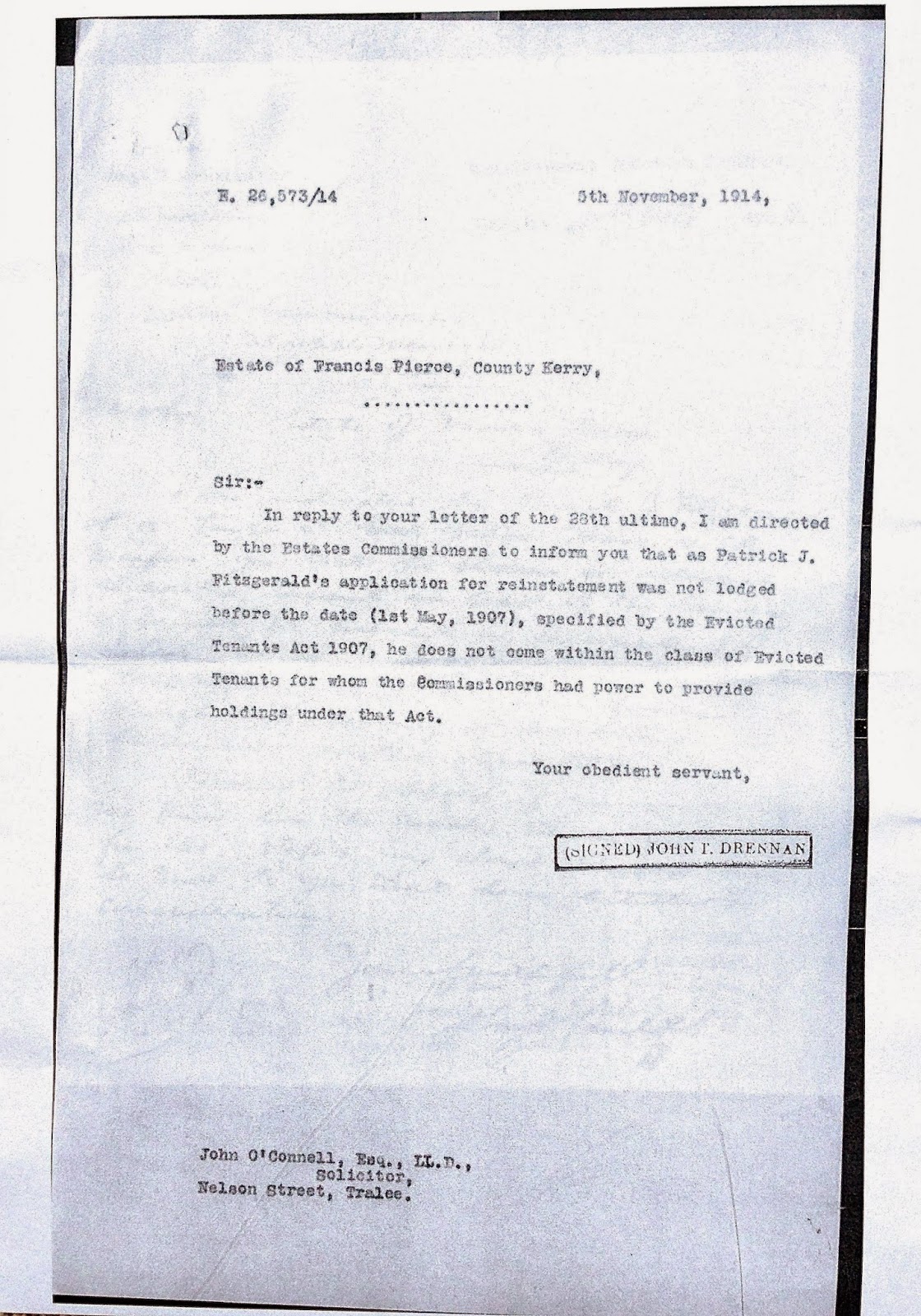 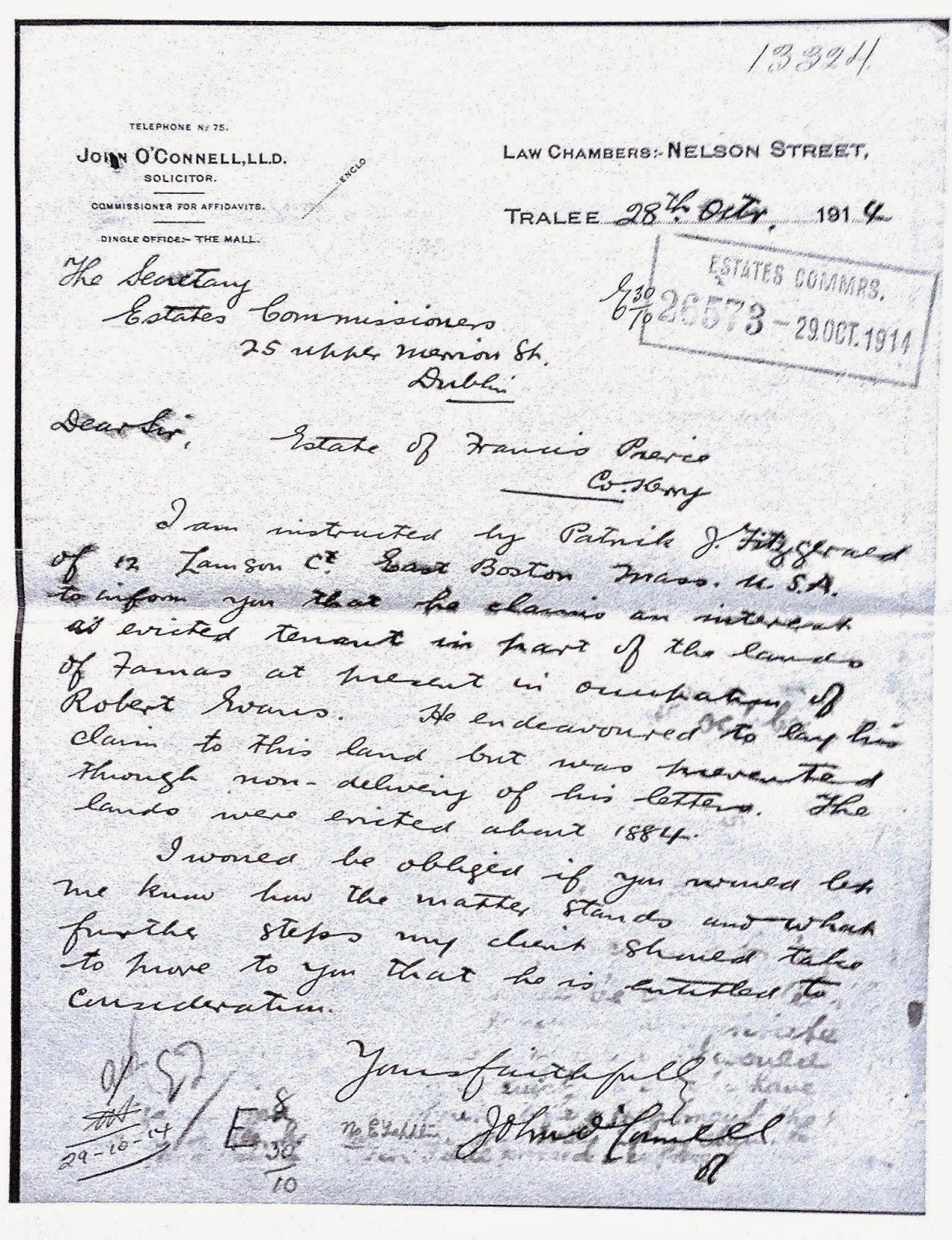 I am instructed by Patrick J. Fitzgerald of 12 Lamson Ct. East Boston Mass. USA to inform you that he claims an interest as evicted tenant in part of the lands of Farnas at present in occupation of Robert Evans. He endeavored to lay his claim to this land but was prevented through non-delivery of his letters. The lands were evicted about 1884.

I would be obliged if you would let me know how the matter stands and what further steps my client should take to prove to you that he is entitled to consideration.

Are you kidding? He "was prevented through non-delivery of his letters?" Sabotaged? Bad postal system? Rotten luck? What happened?? Why had so much time elapsed?

The December 27, 1903 Boston Globe article states "in the past 10 days the United Irish League in Ireland has taken steps to secure the best legal assistance in behalf of all the evicted tenants as part of the program of the national organization." It also says that the act had taken effect on November 1st of that year and "some 50 cases have already been brought before the Land Commission by the officials of the United Irish League of America, and of that number about one half of those affected are at present residents of Massachusetts, particularly in the vicinity of Boston. Among the number are the following:" And then he goes on to interview my grandfather. Well that explains how he was able to afford a lawyer.

I know this is my Patrick because the address he gives is the same street where the family lived when my father was born. For now, I am satisfied that Patrick did pursue restitution of his family farm. But it is still only his word that he was evicted, though there's really no reason to doubt it. I wonder if one of his brother's tried for it. He did have two brothers who remained in Ireland, John and James. John seems never to have left Ireland, but James went back and forth to the US and I haven't been able to find a marriage or death for him yet.

Does the No. 26,573 refer to another case file? I will request it and hope for further information, but something tells me I won't get it. I'll also now write to the archivist and hope he can give me some more ideas, but for now I guess I'm satisfied.