Other posts in this series:
1. "Back to the Old Home--Genealogical Research in Dublin"
2. "Digging for the Truth at the National Archives of Ireland"
3. "How Many Repositories Can I Visit in One Day?"
4. "Irish Land Records Not Just About Land!"
5. "Wronged Again"
6.  "He Endeavored to Lay Claim to This Land But Was Prevented"

I have been feeling mighty discouraged at the National Archives of Ireland's inability to locate a file in the Evicted Tenants collection which I am quite sure treated the eviction of my great-grandfather from the 75-acre FitzGerald family farm in Farnes, Kilgbarrylander, County Kerry, in 1883-84.

I have to say I was a little surprised at my reaction to the file not being found. It went beyond disappointment in not finding a record and instead felt like a slap in the face after all my grandfather had been through. He had been defeated by the system and so had I. I even felt a tear well up, and my friends will tell you I'm not the weepy type. This was pure frustration, passed down and brought to life a century later by one missing file.

What little I know of my grandparents came from my father. Both of his parents were dead by the time I was born and no one ever spoke much of them. They had been simple, hardworking folk, uneducated farmer types trying to survive in the swirl of greater Boston. They had thick brogues and couldn't read or write. My older siblings tell me that Patrick was strict and used to swing his cane at them, and Annie, his wife, liked a good snort of booze on a Friday night.

A first generation kid, born in the teaming tenements of East Boston in 1910, my father did everything he could to distance himself from his provincial parents. By the time he graduated from high school they had lived for nearly a decade on a little dairy farm in Lexington, Mass., just a stone's throw from Lexington Common, scene of the "shot heard round the world," and quintessential New England town. Pops was not one of those Irishmen who longed for the old country. It wasn't his country: he was an American. He didn't celebrate St. Paddy's day, didn't attend parades, hang out in pubs or drink much beer. He self-identified more as a Yankee than an Irishman and even went so far as to marry a Priscilla Barnes, a Protestant Mayflower descendant (below). 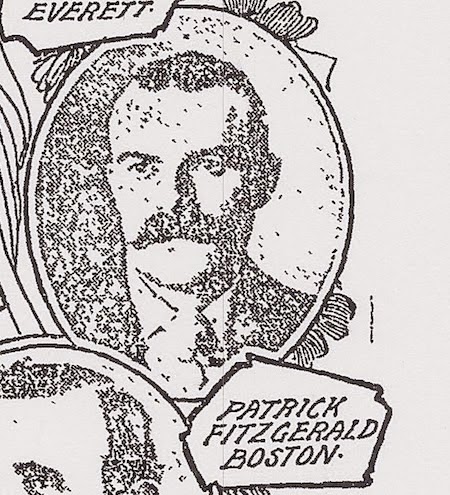 Because my father virtually ignored his Irish heritage, I just never imagined that his parents had wished to go home so very badly. So it took time for me to realize that Patrick really did not want to be here in the United States--he wanted to go home to his farm in County Kerry. He had come over just to make a little money to send home to his mother, and probably hoped he'd be home in a few years. Even after he met my grandmother Annie and settled down he did not stop longing for home, as we have seen by the 1903 article. At that time they had three children and would go on to have another three. He still lived in East Boston, an area heavily settled by immigrants.

I very much want to tell his story, and without that file I cannot. I'm pretty sure it is somewhere at the Four Courts. I wonder if it was pulled and filed in another later file, perhaps. I haven't given up. But at the moment, I'm denied that file. However, just the fact that there was a case in the index that matched what Patrick recounted provided some support to his statement that they had been evicted, though not nearly enough for me to feel confident in citing it as proved. With Irish research you have to be content with the tiniest of steps toward your goal, so I was ready to accept that.

In my previous posts I described the process for obtaining those files. First you have to request the "Evicted Tenants Index and Registers." These are held offsite, at the Four Courts and take a day to be retrieved. Once you have the index and registers you can search each one for your person of interest. They are a jumbled mess of three overlapping systems, in about 12 volumes, all of which must be searched. Some but not all information gets repeated. The volumes were not always labelled and some titles were illegible. The registers gave very little information beyond what the indices had, but sometimes very little is enough.

One set of indices includes people in all counties, arranged alphabetically by first letter, then first vowel of surname, and finally by county. So, for instance, I go to F for Fitzgerald, then at the top of the page you can see "i" above the columns, indicating the first vowel is an i, then I skim down to those in Kerry. At that point they are not in alphabetical order, so you have to look at all of the Kerry entries. 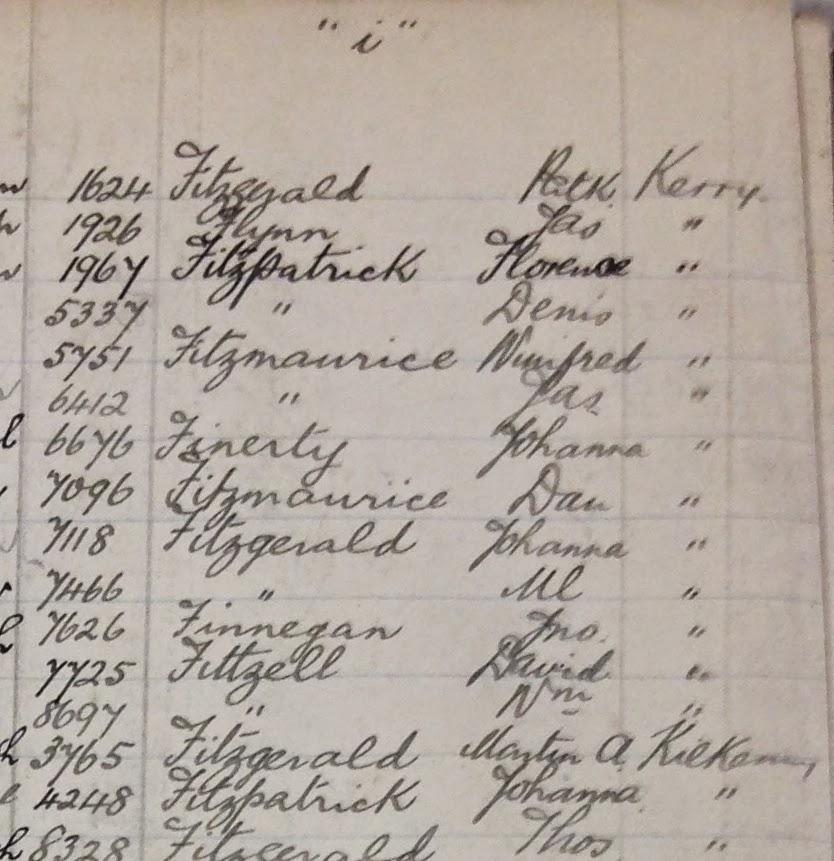 Above is the entry in the index for the file that could not be found, number 1624 for Patk Fitzgerald of Kerry. There was no further information, so I went to the register.

Below is the entry in the Land Commission's Evicted Tenants, Register, vol. 4, that supports but does not strongly corroborate Patrick's story. It gives the landlord's name as Rae--a match!. And of course the case was refused, or Patrick and Annie would have gone back to Farnes. But I'd want to see more to be sure. The file being not found left me at a dead end. 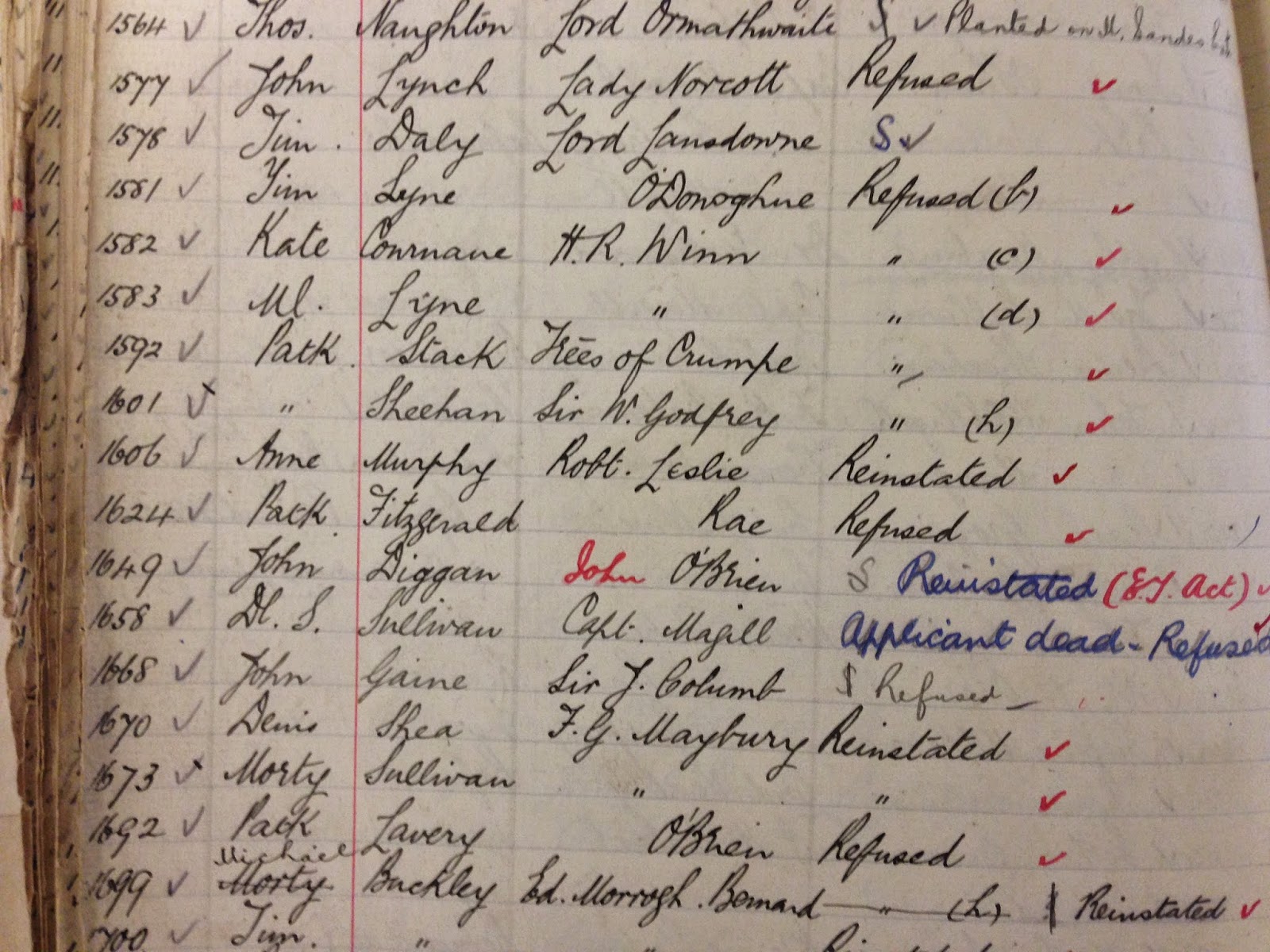 So what do we do at dead ends? We reverse back up the lane a bit and see if there is alternate road we can explore. I had, in fact, found another possible file on my last day in Dublin. I could order it but it was offsite and wouldn't be delivered until I had left, so I requested that it be sent to me and paid a fee. Here is the entry, below, right page, then left. 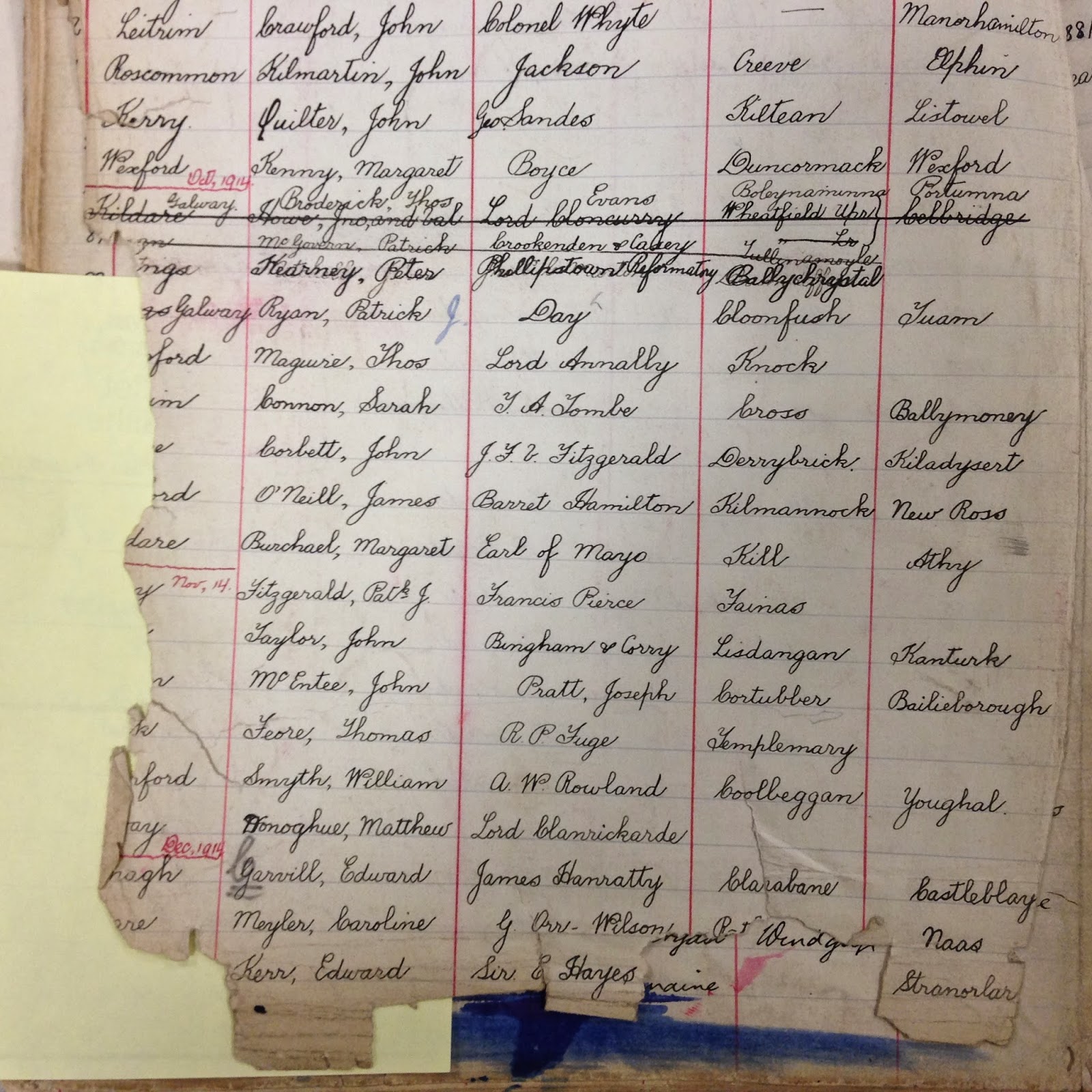 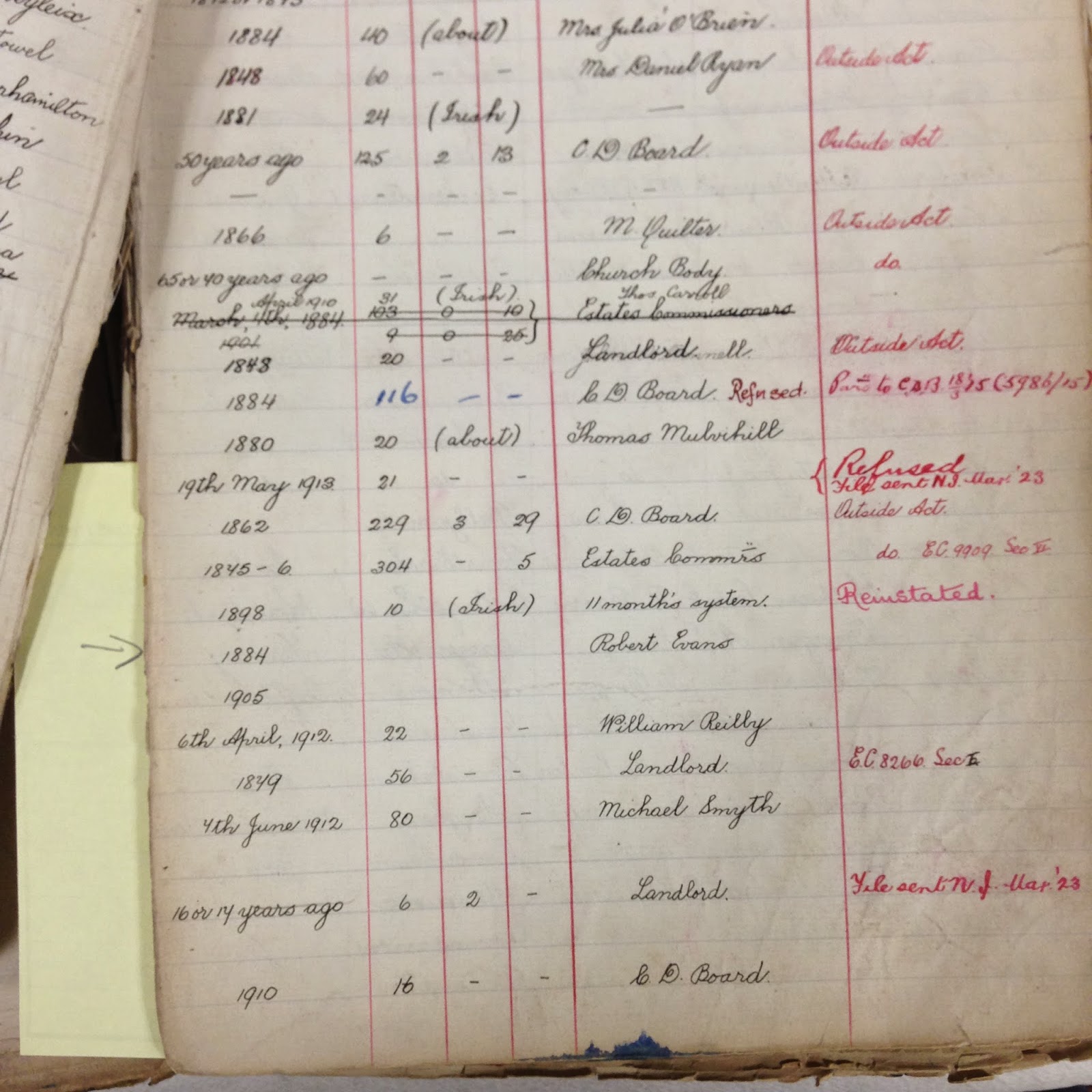 It was simultaneously encouraging and discouraging. This time he is Patk J, and my grandfather was Patrick John. Best of all, the townland is "Fainas"–close enough to Farnes to make me hopeful. The 1884 year of eviction is close enough to 1883 to give me more hope still. But the landlord was wrong.  What happened to Mr. Rae? And what was the outcome?

But OMG, the page is shredded along the left side where the file number would be. I panicked for a second until I realized that in this particular register the files were in numerical order. So I went back a page and counted forward, hoping that the gaps in numbering that I had seen elsewhere would not be a problem here! I came up with number 13,324, and I ordered the file to be sent home to Massachusetts.

Here's hoping, Polly. I can so relate to your wish to be able to tell his story. Amazing how many steps it has taken, already, and still you are waiting for more...